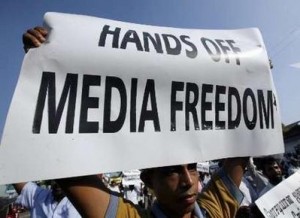 Suppression of media has been endemic to Sri Lankan political history since independence but however analyzing the last few decades the Centre for Human Rights and Research (CHR) & Campaign for Free and Fair Elections (CaFFE) have notices that the focus of suppression has shifted, ultimately targeting the entire hierarchy of news media.

Initially it was the active journalists that were the victims of media suppression and later it shifted to a policy of opting in media owners through using their political aspirations and/or through the influence of using state advertising. However we noted that in recent months that newspaper distributors were increasingly being targeted, specially in Jaffna.

A distributor of Thinakkural newspaper was assaulted on February 7th while a deliverer of Uthayan newspapers was assaulted in January. These attacks, aimed at the lowest rung of the media industry, that had taken place in an area which has a heavy military presence has been generally attributed to the government. Although CHR does not believe in making accusations without necessary evidence we would like to point that a series of attacks on journalists, media workers and activists have taken place in Jaffna in recent times. In addition the perpetrators of these crimes have not been apprehended which automatically lead to a questioning of state authority and rule of law.

CHR and CaFFE have continuously warned about increasing attacks on media in Jaffna and had urged authorities to ensure fundamental freedoms in the North, which would lead to a rapid normalization of the area which has seen 30 years of war. We are no way the only organizations which have pointed at the growing fear psychosis in Jaffna peninsular and the need to remedy that situation.

Sri Lanka is currently ranked 162nd in Reporters Without Frontiers (RSF) rankings, a slight improvement from last year, 163rd. However we must notice that we are the ranked lowest even among our South Asian neighbors, which include countries like Pakistan and Bangladesh.

E. Right to freedom of opinion and expression

43. In its report, the Lessons Learnt and Reconciliation Commission strongly recommended that attacks on journalists and media institutions be properly and conclusively investigated, and urged the imposition of deterrent punishment for such offences (para. 9.115a-c). Under the national plan of action, investigations of current cases are to be completed by the police, while the Ministry of Mass Media and Information is to take appropriate action to ensure media freedom. Furthermore, the Ministry is to promote responsible journalism and consider a code of conduct for journalists, which, however, does not seem to be an adequate response to concerns about the security of media personnel, and which could instead lead to greater media control.

44. It is worth recalling that the Government accepted recommendations at its universal periodic review in 2008 to ensure a safe environment for human rights defenders, as well as to investigate allegations of attacks on journalists, media personnel and human rights defenders and to prosecute those responsible.

45. In 2012, journalists and media institutions continued to be harassed and attacked. In March, the Minister for Public Relations and the Minister for the Media made vicious public attacks on human rights defenders who had advocated at the nineteenth session of the Human Rights Council. The Minister for External Affairs publicly rejected these comments, but no action was taken against either minister.

At a time when there is growing international pressure on Sri Lanka to improve its human rights record it is imperative that the government take concentrated action to improve the safety of media workers and ensure freedom of expression which is guaranteed in Sri Lankan constitution.