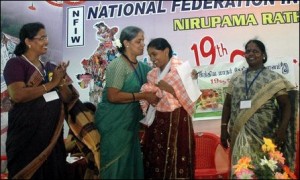 Asserting that â€œSystematic sexual violence against Tamil women by the Sri Lankan military forces, police, paramilitaries during the war on the Tamil people constitute an act of genocideâ€ and that â€œThe question of systematic oppression of Tamil women is directly connected to the national question of the Tamils in the North-East of the island of Sri Lankaâ€, the 19th conference of the National Federation of Indian Women (NFIW) held at Chennai on Thursday passed resolutions calling for an independent international investigation into the war crimes of the Sri Lankan state and a just political solution for the Eezham Tamils through a referendum. The conference, presided over by Magsaysay award winner, NFIW president and prominent civil rights activist Aruna Roy, further urged India and the IC to take measures to end militarization and colonization of the Tamil homeland.

NFIW, the womenâ€™s wing of the Communist Party of India (CPI), was established in 1954 by several leaders who were stalwarts in the Indian independence struggle.

The NFIW national conference held from August 8th to 11th had an exclusive session on â€˜Opposing violence on Eelam Tamil Womenâ€™ on the 9th of August. Speakers at the session included Kavitha Senthil Murugan from the NCCT, All India General Secretary of the NFIW Annie Raja, PathmavathiÂ  Nisha Satyan from the NFIW, and lawyer Angaiyarkanni.

An exhibition of photographs detailing the protracted genocide of the Eezham Tamils and the oppression faced by Tamil women was also on display at the conference.

The full text of the resolution passed by the NFIW conference follows:

Resolution for Eelam Tamil women who suffered by Sri Lankan Army
During the Mullivaikaal massacre and brutal military suppression of the Tamil national liberation struggle in 2009 there were reports of widespread sexual abuse of Tamil women by Sri Lankan armed forces. Rape, molestation, torture and other forms of physical and mental humiliation of Tamil women in the island of Sri Lanka by Sinhala government forces, paramilitaries and other groups has a longer history. Owing to various reports, including the UN Panel report and Permanent Peopleâ€™s Tribunal report, and documentaries focusing on the phases of war leading to May 2009 many cases of sexual violence came to the forefront. But it is an undeniable fact that even after the war was claimed by the government to have ended, various forms of violence are still perpetrated on the minds and the bodies of the Eelam Tamil women.

Over 80,000 Tamil women who have been widowed in the traditional Tamil homeland in the North and East of the island country live under miserable conditions, without adequate aid and facing frequent harassment by the Sinhala military. Former LTTE women members face routine intimidations and psychological tortures. There has been a steady increase in prostitution and human trafficking in these regions. Likewise, other reports suggest that child abuse and teenage pregnancies is also increasing.
It is of utmost necessity now to highlight these occurrences not just as aberrations during a war but as a systemic process of genocide committed by the Sri Lankan state against the Eelam Tamil nation.
Keeping this is mind, we, the participants of the national level conference of the National Federation of Indian Women, place the following resolutions