<![CDATA[The issue that must take centre stage at Sri Lanka’s Universal Periodic Review (UPR) scheduled for 1st November 2012 should be the question of Sri Lanka’s accountability for War Crimes and Crimes against Humanity, bearing in mind the period under review is from 2008 to 2012, covering the critical period before, during and after the war in Sri Lanka. The major players involved in Sri Lanka’s review process must be ready to meet the issue head on. In the light of Sri Lanka’s pathetic ‘National Report’ submitted for the UPR, it is imperative that Sri Lanka’s UPR includes a serious debate on the question of War Crimes that took place in Sri Lanka in the set period under review. This notwithstanding the resolution passed at the 19th session now proven with hindsight to be woefully inadequate in addressing the issue of accountability for War Crimes, for nowhere in the ‘National Report’ has Sri Lanka come up with a substantial and precise action plan to address the issue of accountability or the establishment of a credible domestic mechanism to investigate senior military and political leaders for War Crimes. <a href="http://www.eelamenews.com/?attachment_id=102864" rel="attachment wp-att-102864"> 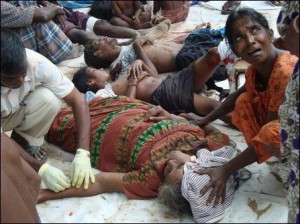 Julian Vego in her critic of the UN concludes that changes need to be made in the UN: “There seems to be no doubt that changes need to be made within these agencies not to mention within the hierarchy of the United Nations which has demonstrated itself in Sri Lanka as an organisation which makes decisions that are often more political than in the interest of the people it ostensibly serves,” which further validates the need for OHCHR to do its job right. The onus rests on Navi Pillai and OHCHR to guide the UPR process in the right direction; to feed the right information for a more honest debate at the working group and plenary level for Sri Lanka’s UPR not to become another white wash. None of the players must try to defuse the otherwise rough edges and give Sri Lanka an easy ride, giving it the luxury of time on the excuse that it needs “time” for delivery on its promises: “time” for political reconciliation; “time” for implementing the LLRC recommendations; “time” for a home grown solution to accountability? In giving it that luxury of time no where is Sri Lanka being compelled to conduct an investigation that would be wide ranging to include top ranking military and political leaders including President Rajapakse. The UPR must serve its purpose. War Crimes – the unsolved Mass killing and human rights abuses that took place in Sri Lanka which the UN workers themselves say are acts of Genocide – orchestrated and accomplished by the Rajapakse regime whilst the UN was turning its back, will hang like a millstone round the UN’s, India’s, HRC’s and the General Assembly’s neck if Sri Lanka’s UPR does not result in anything tangible leading to an independent, international investigation. (SAAG) (The author is an expatriate Sri Lankan Tamil based in Canada and can be reached at sris19@sympatico.ca. The views expressed are author’s own) ]]>