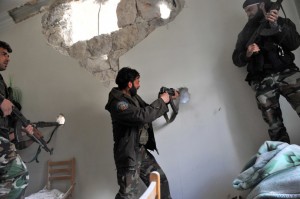 At least 600 Russians and Europeans are fighting alongside the rebels battling the forces of Syrian President Bashar Assad, Russian President Vladimir Putin said during the St. Petersburg International Economic Forum.

â€œIt is known that there are at least 600 people from RussiaÂ  and Europe fighting along with opposition forces in Syria,â€Putin said during the Forumâ€™s plenary session.

Putin reiterated that weapon supplies to the Syrian rebelsÂ  violate international law, and threaten to further destabilizeÂ  the war-torn state.

“Why supply weapons to militant forces in Syria when we areÂ  not sure of the composition of these groups?â€ he said, addingÂ  that it remains unclear where these arms will end up.

“If the United States … recognizes one of the key SyrianÂ  opposition organizations, al-Nusra, as terrorist … how can oneÂ  deliver arms to those opposition members?” Putin said.Â  “Where will (those weapons) end up? What role will theyÂ  play?”

Russiaâ€™s Foreign Ministry has also criticized the supply of armsÂ  to the rebels in separate remarks to AP and Bloomberg: â€œTheÂ  problem is that the weapons are coming to the region anyway,â€Foreign Minister Sergey Lavrov said.

â€œAnd if you take, you know, stock of what is being used by theÂ  opposition you would find a lot of arms shipped by the West,Â  including the US, to the Gulf countries and to other countries inÂ  the region,â€ he said. â€œSo, this smuggling continues andÂ  this is very dangerous. Because the leading opposition force onÂ  the ground is very extremist.â€

Putinâ€™s remarks echo a statement made by French Interior MinisterÂ  Manuel Valls earlier in June, when he said that more than 600Â  European nationals, including 120 from France, are fighting inÂ  Syria.

At the time, Russia said that around 200 of its citizens wereÂ  fighting in Syria alongside rebel militants as part of aÂ  self-proclaimed â€˜Caucasus Emirate’ under the flag of Al Qaeda,Â  and that there were â€œvarious organizations affiliated withÂ  it.â€

In Spain, at least eight people allegedly linked to Al-Qaeda were arrested in Ceuta onÂ  suspicion of recruiting jihadi fighters to go to Syria, andÂ  elsewhere.

Prior to that, Belgium announced in April it had detained theÂ  leader of Sharia4Belgium, radical Salafist organization that wasÂ  allegedly recruiting volunteers to fight in the Syrian civil war.

Britain was one the first Western countries to raise concernsÂ  over European Muslims joining the Syrian rebels. The Home OfficeÂ  voiced fears that scores of UK citizens fighting in Syria may useÂ  their military know-how to wreak havoc when they return home, andÂ  carry out terror attacks.

However, despite these concerns, EU governments agreed to not extend the arms embargo on Syria,Â  effectively allowing them to supply the Syrian opposition withÂ  weapons.

Russia slammed the move, but in response was criticized for its contract to deliverÂ  advanced S-300 long-range air defense systems to Damascus. MoscowÂ  maintains that all arms supplies to Syria are being carried outÂ  under a contract signed with the country several years ago.
“Russia, in the framework of existing international law, inÂ  open and transparent contracts, supplies weaponry to the currentÂ  and the legitimate government of Syria,” Putin said at theÂ  Economic Forum.Â  (RT News)