<![CDATA[Western envoys are urging Arab states not to berate Israel over its assumed nuclear arsenal at the U.N. atomic agency's annual conference, fearing this could imperil wider efforts for a nuclear weapons-free Middle East, diplomats say. A senior diplomat said Arab countries would criticise Israel but were divided over whether to submit a resolution on the issue to next month's annual General Conference of the United Nations' 154-nation International Atomic Energy Agency (IAEA). <a href="http://www.eelamenews.com/?attachment_id=102041" rel="attachment wp-att-102041"> 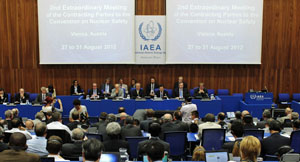 In a surprise move at last year’s IAEA gathering, the Arab group refrained from singling out Israel in this way in what was called a “goodwill gesture” ahead of planned talks in 2012 on creating a zone without nuclear arms in the Middle East. Israel welcomed this as a “positive” move, in a rare conciliatory exchange in an otherwise heated debate that underlined deep Arab-Israeli divisions on nuclear issues. Diplomats said Arab states had not yet decided whether to propose a non-binding but symbolically important draft text criticising “Israeli Nuclear Capabilities” at this year’s week-long meeting that starts on Sept.17. They expressed concern that an Arab move against Israel would discourage the Jewish state from attending the talks due to be held later this year on a nuclear arms-free Middle East. An Egyptian plan for an international meeting to lay the groundwork for the possible creation of a Middle East free of weapons of mass destruction was agreed at a review conference on the nuclear Non-Proliferation Treaty (NPT) in 2010. BRUISING BATTLE But the Western official organising the conference, Finnish diplomat Jaakko Laajava, said in May he had yet to secure the needed attendance of all countries in the region. It was a sign of the difficulties involved in getting Israel, its arch-foe Iran and other Middle East nations to sit around a table this year to discuss the divisive issue. “It is a very fragile process that needs to be launched,” one European diplomat said. “Singling out Israel would not at all be helpful, would be counterproductive.” Israel is widely believed to possess the Middle East’s only nuclear arsenal, drawing frequent Arab and Iranian condemnation. The Jewish state is the only Middle Eastern country outside the nuclear Non-Proliferation Treaty (NPT). Israel and the United States regard Iran as the world’s main proliferation threat, accusing Tehran of covertly seeking a nuclear arms capability, something the Islamic state denies. Arab states scored a diplomatic victory in 2009 when IAEA members narrowly endorsed a resolution urging Israel to join the NPT and place all its atomic sites under agency supervision. Brought up again in 2010 to keep up pressure on Israel, the resolution was defeated after a bruising diplomatic battle, in which Washington and its allies argued that zeroing in on Israel would harm any hope of banning nuclear arms in the region. In June this year, Arab states asked for the “Israeli Nuclear Capabilities” issue to be put on the conference agenda, but it remains unclear whether they will follow that with a proposed resolution or refrain, as they did in 2011. Israel’s refusal to become party to the NPT or to place its nuclear installations under IAEA safeguards is “exposing the region to nuclear risks and threatening peace”, they said. Israel has never confirmed or denied having nuclear weapons under a policy of ambiguity aimed at deterrence. It says it would only join the NPT after a comprehensive Middle East peace settlement. If it signed the 1970 NPT pact, it would have to renounce nuclear weaponry. An Arab resolution aimed at Israel would “undermine any genuine attempt to promote confidence and security in the Middle East,” Israel’s ambassador to the U.N. nuclear body, Ehud Azoulay, said in a letter to IAEA Director General Yukiya Amano. (Reuters).]]>