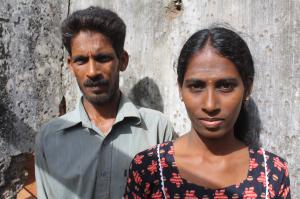 The World Food Programme (WFP) hopes to expand its ongoing cash/voucher (C/V) programme across northern Sri Lanka, allowing thousands of recent returnees to diversify their diets. â€œMore than 15,000 men, women and children have so far benefited from the programme in Jaffna,â€ Mads Lofvall, WFP acting country representative, told IRIN. â€œWith the expansion we hope to reach more than the currently planned beneficiary caseload – 45,000 over the next two years.â€ Under the programme, beneficiaries receive vouchers valued at US$11 per month per person, for a six-month period that can be redeemed at 815 multi-purpose cooperative society outlets across the north. C/V enhances diet diversification, allowing beneficiaries to purchase 21 different types of essential food commodities identified according to community preferences, including cereals, pulses, coconut oil and condiments. Initially launched as a pilot scheme in Jaffna District in March 2012, WFP, pending funding, hopes to include all five districts in Sri Lankaâ€™s Northern Province – Jaffna, Mullaitivu, Kilinochchi, Vavuniya and Mannar – either through voucher or cash transfers. C/Vs are more advantageous than traditional food distributions, experts believe, as they allow people access to a greater variety of food options, according to findings in the country and globally. At the same time, the approach benefits the local economy as it allows beneficiaries to spend the money locally and purchase locally produced commodities. Moreover, the programme allows WFP to reach more people in need at the same cost to its donors. But for most recent returnees to the area, many of them now focused on rebuilding their homes, it was the opportunity of choice which was most important. â€œI like the choice. Now I can buy the items I want,â€ said one recent returnee outside his battle-scarred home outside Jaffna. According to the UN Office for the Coordination of Humanitarian Affairs, more than 440,000 people have returned to Northern Province after years of displacement and the end of that country’s decades-long civil war. Over the past two years, food security in the north has improved, from 60 percent of households assessed as severely or moderately food-insecure in 2011 to 40 percent in 2012 – a drop attributed to a reduction in poverty, increased dietary diversity and a change in livelihood patterns. More than three years after the conflict was officially declared over, however, most returnees are still struggling to establish sustainable livelihoods and depend on external existence for help. (IRIN)]]>