<![CDATA[KUALA LUMPUR: The Sri Lankan deputy high commissioner is accused of making disparaging remarks about Malaysia and a heated protest is held to demand an apology. <a href="http://www.eelamenews.com/?attachment_id=108769" rel="attachment wp-att-108769"> 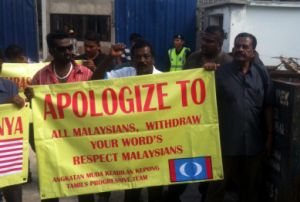 Tempers flared and the Sri Lankan national flag was ripped to pieces by a group of angry protesters this morning who demanded an apology from the deputy high commissioner who had apparently insulted Malaysia. Armed with placards, the protesters, who gathered outside the high commission here, claimed that on Dec 27, Sunil Vikramesing had chased a group of protesters from the commission’s grounds and uttered the words: “What the f**k Malaysia and f**k constitution.” Sunil was said to have made these remarks when the Tamil Progressive Team (TPT) brought a few Sri Lankan workers to the high commission, who were abused and not paid their salaries. “We are asking for Sunil and the high commission to express their apologies and we will disperse peacefully… what they said was insulting to all Malaysians,” said TPT president K Arjunan. A group of police personnel numbering around 30 stood guard outside the building to prevent the protesters from marching towards the high commission’s grounds. Arjunan, who was adamant that the protesters be allowed to meet Sunil, tried to break the human barrier created by the police. Following this, a scuffle broke out between Arjunan and a few police personnel who were holding him back. Arjunan told FMT that the police had no dignity and were working in tandem with the embassy. “Why are you [police] stopping us? Don’t you have any dignity? That guy [Sunil] said harsh words about Malaysia and you’re not doing anything to arrest him and you’re stopping us Malaysians?” he said. Arjunan, who led the group of 15 protesters, repeatedly chanted: “Sri Lanka…die…Sri Lanka…die…we are a patriotic bunch…we will protect our rights.” Kapar MP S Manikavasagam, who was also present at the protest, asked the police for help in getting an official from the high commission to explain the matter to the protesters. A public relations officer from the embassy later met Manikavasagam and MS Arjunan, who is the information chief of Kepong PKR. “We deny that Sunil ever uttered any of those words inside the embassy grounds and we will wait for the police to investigate and we must conduct this in a civilised manner,” said the official. However, Manikavasagam told the official that he was giving them two weeks to issue an apology. “If after two weeks there is no action…I will bring thousands of people to protest here and things might get ugly… if it’s necessary to bring a coffin and burn it here…I will do it,” he warned. During the protest, Arjunan also tore the national flag of Sri Lanka while calling for the country to be “destroyed”. Freemalaysiatoday]]>