The U.N. today released a damning 128-page internal review of its conduct in Sri Lanka during the bloody, final several months of the country’s 28 year-long civil war. The main takeaway — as I reported yesterday — is that the U.N. failed abjectly in its responsibility to protect the more than 40,000 civilians killed, mostly as a result of indiscriminate government shelling.

But the published report includes a series of redacted passages describing a key, high-level meeting in March 2009 with U.N. SecretaryGeneral Ban Ki-moon, in which several of Ban’s top advisors argued against publishing the U.N. death toll, characterizing Sri Lankan atrocities at war crimes, or pressing for an international investigation into possible abuses by combatants. 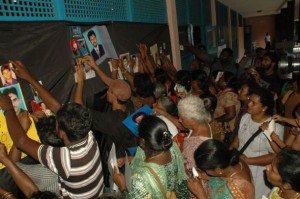 The redacted content came to light because the document released by the U.N. secretariat contained an embedded reference to the blacked-out passage. Simply cutting and pasting the redacted sections from the original PDFon a Microsoft Word document revealed the portions that had been scrubbed from the report.

During that 2009 meeting, Navi Pillay, the U.N. High Commissioner for Human Rights, had proposed that the U.N. publish a casualty estimates toll — which, at the time, amounted to more than 2,800 dead and 7,500 injured — from an internal U.N. assessment, and to warn the Sri Lankan government and the separatist Liberation Tigers of Tamil Eelam (LTTE) that they could face war crimes charges.

But her request was fiercely resisted.

Several top U.N. advisors, including the U.N.’s top man in Sri Lanka, Neil Buhne, and the U.N.’s emergency relief coordinator, John Holmes, “did not stand by the casualty numbers, saying that the data were ‘not verified,'” noted a redacted part of the report.

“Several participants questioned whether it was the right time for such a statement, [and] asked to see the draft before release and suggested it be reviewed by OLA (The Office of Legal Affairs),” according to the report.

But Pillay dismissed the concerns, and proceeded to prepare a statement warning the Sri Lankan military and the LTTE that their actions “may constitute international crimes, entailing individual responsibility, including for war crimes and crimes against humanity.”

“Credible sources have indicated that more than 2,800 civilians have been killed and 7,500 injured since 20 January, many of them inside the no-fire zone,” the statement read. “There are legitimate fears that the loss of life may reach catastrophic levels if the fighting continues in this way…. More civilians have been killed in Sri Lanka in the past seven weeks than in Afghanistan during the whole of last year.”

Ban’s chief of staff, Vijay Nambiar, appealed to Pillay at the time to reconsider.

“I perceive that the severity of the draft statement you propose to make is likely to have very serious political and legal repercussions for the rest of us and I hope you can consider carefully this fact while finalizing your statement,” Nambiar wrote in an email to Pillay, according to an un-redacted portion of the report. Reminding her that Buhne and Holmes had “underlined the fact that the accuracy of the figures remains still quite questionable…. By getting on the record with these figures I feel we are getting into difficult terrain.”

Holmes, meanwhile, made a similar case for holding back the number, citing the “difficulty of being able to defend them with confidence” and the “risk of a counterproductive reaction from the Sri Lankan government is high.”

“The reference to possible war crimes will be controversial,” he added. “I am not sure going into this dimension is helpful.”

Members of the policy planning committee also expressed concerns that a proposal by U.N. Special Advisor on the Prevention of Genocide Frances Deng to travel to Sri Lanka “may add to overcrowding of U.N. actors” dealing with the crisis. They said that a proposal to appoint a special envoy for Sri Lanka to raise the profile of the conflict was a good idea but that it “did not seem politically feasible” given government opposition.

In the months following the war, according to the public section of the report, the U.N. brass was increasingly focused on exploring how perpetrators of rights abuses might be held accountable. But the U.N. redacted passages showing that there was “considerable disagreement” among senior U.N. officials on how to achieve that.

“Discussing whether or not the Secretary General should establish an international Commission of Experts, many participants [at a July 30 Policy Planning Committee meeting] were reticent to do so without the support of the [Sri Lankan] government and at a time when Member States were also not supportive. At the same, participants also acknowledged that a government mechanism was unlikely to seriously address past violations. The Secretary General said that ‘the government should be given the political space to develop a domestic mechanism’ and that only if this did not occur within a limited time frame would the UN look at alternatives.”

Nearly 2 and a half years later, and despite Sri Lanka’s commitment to a credible investigation into war-time abuses, the U.N. has yet to issue a firm public call for an independent inquiry into the war. (FP)