At least three others have been injured, including a police officer who attempted to bring down the gunman, in the rampage at the temple in Oak Creek, Wisconsin, on Sunday. 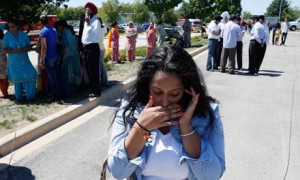 Last night there were concerns that other gunman were still inside the temple and that other worshippers, including women and children, were being held hostage.

However those reports were played down by police who said that officers had conducted a sweep of the building and that they did not believe there were other gunmen.

A police spokesman said that three dead bodies had been found outside the temple – one of whom was the shooter – while another four were discovered inside.

The shooting comes just two weeks after 10 people were killed when gunman James Holmes opened fire at a cinema in Aurora, Colorado. Last night Barack Obama was informed of the latest massacre. The President has been urged to address gun control as an issue ahead of this year’s election.

In the latest incident, which took place nine miles outside of Milwaulkee, police spokesman Brad Wentlandt said that a police officer who tried to engage the suspect was shot several times. The injured officer is a 20 year police veteran and was taken to hospital.

Mr Wentlandt said: “An officer arrived and engaged a suspect. That officer was shot multiple times. He is expected to survive,” he said. “The officer exchanged fire with the shooter. That shooter was put down. He is down at the scene and is presumed deceased.”

Initial reports suggested a hostage situation, with other gunmen inside the building, but police said that those reports could be down to the fact that several emergency reports provided conflicting information but could have been of the same person.

He added: “There is a concern about multiple gunmen. At this time we have not identified any additional gunmen.

“It is possible that these multiple reports were of the same person. We have not identified additional shooters at the temple or on the scene.”

He added: “We believe we have the situation contained here.”

Police were first alerted to the shooting just after 10am local time (4pm GMT). There were reports that a Sikh priest was the first person shot outside the building.

The temple was preparing for a meal which was scheduled to take place later in the day. Up to 400 guests were expected but not that many people had arrived when the gunman opened fire.

Witnesses suggested that women and children would have been at the temple preparing for the meal. Children’s classes were due to begin at 11.30am.

Local reports suggested at least three people were taken to hospital injured however the police spokesman appeared to suggest this number was just two.

According to information broadcast over police radio, a witness to the shooting said the shooter was a white male, bald, with a heavy build. He was wearing a sleeveless T-shirt, according to Oak Creek Patch. He was last seen with two handguns.

Police have refused to speculate on any possible motive.

Ven Boba Ri, a member of the temple’s committee, said the man started shooting after he walked up to a priest who was standing outside, and shot him. Then he went inside and started shooting.

“We have no idea,” he said of the motive. “It’s pretty much a hate crime. It’s not an insider.”(The Telegraph).