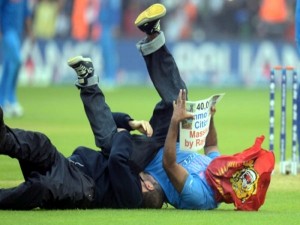 A Tamil protester who invaded the pitch during a cricket match between Sri Lanka and India in Cardiff, has been released on conditional bail by a UK court, Wales Online reported.

Manimaran Sadasaramoorthy, 42, of Mitcham in Surrey, travelled to Wales on June 20 this year to take part in a legal protest at the cityâ€™s Swalec Stadium against the presence of the Sri Lankan cricket team on British soil.

The team lost to India by eight wickets in the Champions Trophy semi-final.

Pleading guilty to a section five public order offence at Cardiff Magistratesâ€™ Court, the unemployed dad of two told Judge Martin Brown that he ran on the pitch during the match carrying a banner â€œfor the 40,000 people killed by the Sri Lankan governmentâ€ and a Tamil Eelam flag of a proposed independent state that Tamils in Sri Lanka want to create in the north and east of the country.

The largely peaceful protests in Cardiff followed a violent incident near the Oval Stadium in London the same week, where Tamil and Sinhala activists clashed during the Sri Lanka-Australia cricket match.

Sadasaramoorthy was accused alongside six other protesters, who all pleaded not guilty to the offence and were bailed with the condition that they cannot attend any national or international cricket matches until their trial in September.

An eighth man admitted throwing a stone at a passing car outside the stadium, while a ninth man accused of common assault was unable to submit a plea because he could not understand the Tamil interpreter provided by the court â€“ his case was adjourned until July 23.

Prosecutor David Cooke told the court Sadasaramoorthy gave a false name and date of birth on his arrest and was later found to have â€œprevious convictions for dishonestyâ€, Cooke said, the last of which was in 2006.

Asked by Judge Brown why he ran onto the pitch, Sadasaramoorthy â€“ who was representing himself â€“ said: â€œMy dad lived in Sri Lanka in the north east and in 2009 the Sri Lankan government declared a war â€“ my father was arrested and they murdered him.â€

Saying he was aware the ethnic Tamils had a â€œgrievanceâ€ against the Sri Lankan government, Judge Brown asked him to instead explain why he ran onto the pitch on June 20.

Sadasaramoorthy answered: â€œOn the day I went a lot of Sri Lankans were shouting â€˜you can never come back to Sri Lankaâ€™, saying if you come there they would kill me, so I told them you are in a democratic country in Britain and that they couldnâ€™t do anything here.

â€œThatâ€™s why I took the flag and ran on to the pitch.â€