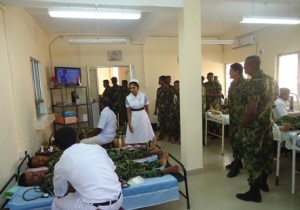 An investigation is underway over the cause of the food poisoning which saw over 100 soldiers attached to the Mattegoda army camp being hospitalized yesterday.

The Sri Lankan Army spokesman Brigadier Ruwan Wanigasekera said that 133 soldiers were admitted at two hospitals yesterday after the dinner they consumed at the army camp on Monday made them fall sick.

Wanigasekera told that the health condition of the soldiers admitted to hospital was not serious and they should be discharged from hospital soon.

He said that the food that they consumed was cooked in the camp and there may have been some sort of germ in it at the time.

The army spokesman said that lab tests are now being carried out to determine exactly what caused the food poisoning but he ruled out sabotage.

“This is not a serious incident. It’s a case of food being spoiled or something like that. Till the lab tests are complete we can’t say what exactly made the soldiers fall sick,” he said.

He said that the soldiers had noodles and chicken that night and the chicken may have been spoiled.