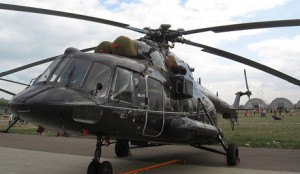 Russiaâ€™s Rosoboronexport has announced an order from Sri Lanka for another 14 Mi-171 helicopters, to be built at the Ulan-Ude plant, the Defence Industry Daily website reported. The Sri Lanka Air Force (SLAF) started operating Mi-17s in 1993 and it currently has a fleet of 13-18 Mi-17 helicopters.

The new order is part of a $300 million, 10-year loan to buy equipment for Sri Lankaâ€™s military, which was signed during a 2012 state visit to Russia.

The website noted that Russia and China were instrumental in Sri Lankaâ€™s â€œRajapaksa modelâ€ of dealing with its insurgency, and provided political cover at world forums like the UN. Even more important, they provided a significant quantity of weaponry and support without any human rights conditions, or threats of embargo. That backing, in turn, allowed Sri Lankaâ€™s government to unleash the full might of its military against the Tamil Tigers, smashing through their strongholds and towns en route to the final battle near Putumattalan.

Both China and Russia continue to remain very active in Sri Lanka. chinaâ€™s centerpiece is a massive construction effort to built a port at Hambanthota, which will serve as a way-station for commercial traffic to Africa, and will also be capable of hosting warships.

The announcement of latest deal between Russia and Sri Lanka, meanwhile, comes as Sri Lanka also discussed exploration and development of its natural gas resources with Russiaâ€™s Gazprom, who has been doing some exploration in the area.