<![CDATA[Taliban radicals have reportedly beheaded 17 civilians, including 2 women, in Southern Afghanistan. Local authorities say the dead were executed for attending a party where unrelated men and women were present. <!--RTEditor:genereated-->Â­The attack happened during a celebration near the Musa Qala district, about 75km north of the capital of Helmand province, Lashkar Gah, said district governor Nimatullah. 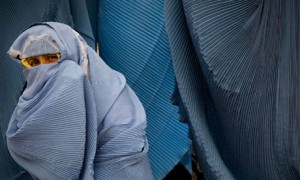 The Taliban holds control over large swathes of Helmand, while the central government has no grasp over it at all. The party involved music and men and women dancing together, of which Taliban fighters reportedly harshly disapprove. Generally, in Afghanistan, women and men do not socialize together unless they are related. Other officials have offered different explanations for the slaughter. Helmand police spokesman Farid Ahmad Farhang said the villagers may have been executed for being government spies. Meanwhile, Helmand government spokesman Daoud Ahmadi said shots were fired after a stand-off between two local warlords. “There are two Taliban commanders, Mullah Wali Mohammad and Mullah Sayed Gul, that control the area, but they argued about two women [at the gathering].” The women are among the dead. “Their throats were slit, but their heads were not completely cut off,” added Ahmadi.

The number of civilian killings has soared in the last few months in Afghanistan, a local tribal leader told Al-Arabiya. â€œWe had three people beheaded during the month of Ramadan. Another person, the son of a tribal elder, was beheaded recently,â€ Haji Musa Khan said. TheÂ  massacre comes in the wake of the recent statement of Taliban topÂ  commanderÂ  Mullah Mohammad Omar, who urged the militant network to avoidÂ  civilianÂ  deaths in the violence-torn country â€“ a step regarded by manyÂ  as anÂ  attempt to boost the networkâ€™s popularity among the population. NewsÂ Â  of the bloodbath in the countryâ€™s south comes against the backdrop of aÂ Â  â€œgreen-on-blueâ€ attack in the countryâ€™s east, with an Afghan soldierÂ Â  gunning down two NATO officers. The killed coalition troops were reportedly instructors training Afghan security forces. The assault has been confirmed by ISAF officials. RogueÂ Â  killings of US-led international forces have spiked in 2012, leavingÂ  42Â  people dead in dozens of assaults so far and prompting NATO to boostÂ Â  security. The measures include a demand issued for all international troops to carry loaded weapons at all times. TheÂ  Afghan government has also reacted toÂ  the increase in the killings ofÂ  foreign troops: last week, theÂ  leadership pledged to re-examine theÂ  files of over 350,000 policemenÂ  and soldiers to find infiltrators theÂ  Taliban claims it has in theÂ  Afghan security forces. On theÂ  whole, violence has soared in theÂ  region recently. A swathe of suicideÂ  bombings left 63 people dead andÂ  almost 150 wounded in a string ofÂ  attacks just over a week ago. Some have predicted the Taliban could take power in the country when NATO leaves the country in 2014. But former MP Daoud Sultanzoy says that is not necessarily their aim. â€œThe Taliban do not want to take control. What they want to do is disrupt and demoralize, and debilitate the governmentâ€™s capabilities. And then they have reached their goal â€“ they do not have a vision beyond that,â€ he told RT.]]>