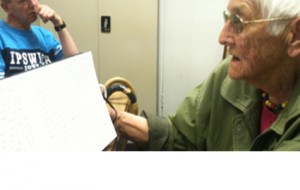 Two voluntary workers Joyce Newby and David Newby were in the south of Sri Lanka, on the day the pogroms against Tamils begun in Colombo in 1983 July. Both of them had planned to stay in Sri Lanka for a long time.

But having lost lots of friends in the July killings and disgusted by the turn of events, they soon left Sri Lanka. Joyce Newby however kept brief notes of the day and remembers the events vividly to this day. She now lives in England and hopes to return to Paranthan (in the north of Sri Lanka) where she lived for several years.

Here we publish her eyewitness account of the day as part of remembering the 30th anniversary of the brutal massacre that took place. If you want to send messages to Joyce Newby, please mailinfo@tamilsolidarity.orgThis email address is being protected from spambots. You need JavaScript enabled to view it.and we will pass them on to her.

â€¦The next day I was due to go to Galle, about 60 miles away with Beatrice, my Sinhalese nurse partner. The driver came quite early and we departed. David was due to visit a childrenâ€™s home on the edge of Colombo and stayed behind. We got to our state receiving home and worked there all day and then I went to my lodging â€“ I think Beatrice was with me â€“ and we slept. Next morning we were awakened by the owner who told us that there had been bad rioting in Colombo and we must get a pass from the army post to allow us to return.

We set off in the SCF vehicle and found the first army post. All the soldiers looked very nonchalant â€“ not terribly friendly. However, we eventually acquired a pass and then one of the army asked if we could take army personnel with us. I was very nervous but said â€œSorry we are only allowed to take S.C.F personnelâ€. At that moment I thought I might be shot but they just stood aside and we left!

On the journey home Beatrice asked the driver to stop at the first market and she got out to buy fish and packets of sugar. â€œWe always have to queue for food when thereâ€™s riotingâ€ she said. I realised that this happened every so often. We would all have to obey curfews â€“ the roads would be empty except for the army and all the Tamils in Colombo would be terrified. Any big building available would be turned into a refugee camp for the Tamils. Schools and Universities would be closed. I was nervous as I had no idea where David was. As we approached Colombo we saw evidence of violence. Roadside stalls had been broken; buffalo carts burnt leaving a pile of ash by the road. Homes had been damaged but there was no evidence of crowds or rioters now.

I was concerned as I knew the new building SCF was renting was owned by Tamils. We got nearer and nearer and drove down Kinross Avenue and into the driveway. As we did so David suddenly appeared on the balcony, first floor and shouted. My â€“ was I pleased to see him.

When Beatrice and I were travelling back to Colombo from Galle we keep seeing signs of burning and destruction along the road. David was in an SCF van on the way back from work at the childrenâ€™s home. About 5 miles from Colombo he encountered unruly crowds of men coming straight at him on the main road. He was flagged down and told to give them his petrol. There were many Buddhist monks among them. Fortunately the van used Diesel fuel which could not make petrol bombs so they let him go!

The job of clearing up has just started and that is a massive job. The central shopping area in Colombo, called the Pettah, where hundreds of little shops were, looks like the aftermath of a bombing raid. Many of our local shops have just vanished. The photographic shop where I get my film developed has been burnt down. Two Saree and material shops have gone and nothing left but just bare brickwork and no roof. Both these shops gave me old cotton reels for the children. Our banana shop has just been shovelled away â€“ a bare piece of ground. Yesterday the vegetable shop in the market had disappeared â€“ probably the ownerâ€™s in a refugee camp.

Our friends tell us of horrific tales of escapes and non-escapes from the mobs. We are all expected to pick up the reins and continue as before but that is very difficult. David and I find we are very irritable. Many of the Colombo Tamils have fled to Jaffna, some to India and some to other countries. Several thousand are still in camps and naturally they are the poorest ones with nowhere else to go. It all seems such a waste when the simplest act of living can be so difficult here.
Courtesy – http://www.tamilsolidarity.org/