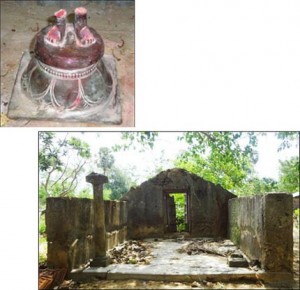 The International Policy Digest has authentically published a shocking news item, that 367 Hindu temples have been demolished in Sri Lanka, in areas, predominantly populated by Hindu Tamils. This document released in March 2012, has come out in the media now, and has created panic amongst the Tamils.

The Rajapakse government in Sri Lanka, according to this report, is all out to destroy the Tamil monuments in predominant Tamil areas, to prove that no such areas existed, while settling rural Sinhalese folks in those areas, and silently destroying Hindu temples.

The Tamil enthusiastics have vehemently protested that by destroying Hindu temples, the Sri Lankan government is determined to wipe-out the cultural heritage of the Hindu temples. It has been specifically mentioned that in Jaffna alone, 208 temples have been destroyed.

In the Trincomalee district in Eastern province, where most of the Tamils live, 17 Hindu temples in villages such as Upparavu, Lankapatnam, Saambal theevu, have been destroyed.

Six temples in Inthupuram, Manikkapuram, Union Kulam in Kilinochchi district, and in Mullaitheevu area of Mankulam, Periyakulam, Oddusuddan and some small villages too, many have been destroyed, with no trace of them being there originally.

In Vavuniya district, a total of 12 temples have been demolished, burnt and destroyed.