Five fishermen from Tamil Nadu were injured when they were attacked allegedly by Sri Lankan naval personnel near Katchathivu islet near the island nation. 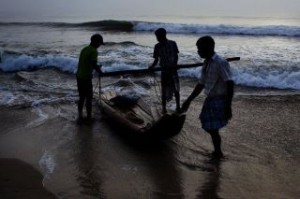 They were part of a group of 2788 fishermen who had put out to sea in 697 boats 0n Saturday, fisheries department officials said.

The officials said Sri Lankan Naval personnel came to the area in four patrol vessels, fired in the air and surrounded them. They later boarded a boat and beat up the five fishermen with sticks, damaged their nets and threw the nets into the sea.

In another incident, fishermen who put out to sea in 10 boats off this coastal town were warned at gunpoint not to cross the International Maritime Boundary Line, officials said.