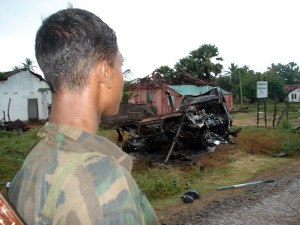 5000 cases to be file against land grabbing at Valikamam area in Jaffna district by Sri Lankan military.

Four hundred families at Thezipalai registered their names to file case against the military land acquisitions.

People staged a protest on April 29th demanding army to stop land acquisition and resettle people in their own lands.

TNA MP Sumanthiran said at present 400 families at Thezipalai have registered their names. People will file separate case against Sri Lanka Army in the court.

TNA further noted military personals have violated the judgment of the Supreme Court as they have taken steps to appropriate the land of 6000 acres against the court ruling and a separate case will be filed against the particular action.

On behalf of displaced people Mawai Senadhiraja filed case at the court and Supreme Court ordered to resettle people in their own lands.