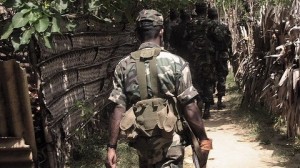 The Sri LankanÂ soldier, who had allegedly raped a girl, just 6 years and 8 months old, at Nedunkerni, Vanni, was identified by witnesses and the victim at the Vavuniya Magistrate’s Court, recently.

The soldier was attached to an Army camp at Nedunkerni.

Sri Lankan Police said, the suspect was arrested by the CID and remanded over the incident, alleged to have taken place on 14 May. The suspect was produced before Vavuniya Magistrate on 7 June for an identification parade. Police said, the victim is a Year-2 pupil. When the victim’s mother, with some neighbours, had gone in search of her daughter as she got late to return after school, they had found the girl in the jungle by the side of the road, about 65 metres away from the house. The victim had fallen on the ground and was groaning in pain. Her pair of shoes and socks too were found in the vicinity.

The victim had claimed she was dragged into the forest by a man who came on a bicycle. Her mother had made a complaint to the Nedunkerni Police.

A judicial medical test revealed the victim had been sexually abused. She was admitted to the Vavuniya Hospital.

The same soldier had tried to rape a small girl on an earlier occasion, on 8 May, at Dehiattakandiya. He had been released on bail over that case.