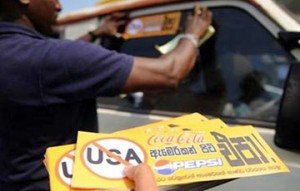 Pro – Govt. Sinhalese groups have launched a campaign against US products, requesting the public to avoid purchasing them.

Pro-Sinhalese groups have made the particular request from the public at a protest held on March 23 in front of the Fort railway station.
The demonstration was held as mark of protest against the adopted US backed resolution against Sri Lanka in Geneva.

They say that all US products should be avoided as the US has moved against Sri Lanka.

Pasting stickers containing the slogan Boycott US products for the motherland on passing vehicles, the protestors also requested the youth to boycott American products such as Coca-Cola and Pepsi.