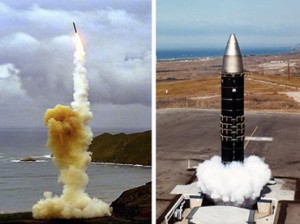 Washington is set to shell out hundreds of billions of dollars over the next decade to overhaul its aging nuclear arsenal. The daunting task comes as Capitol Hill is faced with $1.2 trillion in federal budget cuts over the same period. Despite nearly two decades of avoiding costly and politically unpopular modernizations of the American nuclear weapons complex, the Washington Post reports that plans for a full-scale overhaul of the countryâ€™s arsenal are underway. The modernization of the US nuclear weapons complex â€“ which includes an inventory of some 5,113 warheads, their strategic delivery systems and production facilities â€“ has been conservatively estimated at $352 billion over the coming decade by nonpartisan think tank the Stimson Center the Post reports. However, that figure could rise, especially if the hugely vital but publicly undervalued task is put off any longer. But in an age of asymmetrical warfare, where the Pentagon is facing massive cuts to its conventional force, spending hundreds of billions to refurbish the countryâ€™s nuclear arsenal is a tough sell as the United States remains embroiled in the worst economic crisis since the Great Depression. Further complicating matters, Congress is facing an astounding $1.2 trillion in automatic, across-the-board cuts to the federal budget over the next ten years under the highly contentious 2011 Budget Control Act (BCA). Apart from slashing 9.4 per cent from defense discretionary funding â€“ $54.7 billion from the Pentagon for fiscal year 2013 alone â€“ a further 8.2 per cent cut in non-defense funding is also slated, bringing the 2013 total to $109 billion. That Washington will be forced to cut 11.1 billion from Medicare as billions more are allocated to the nuclear arsenal could be a bitter pill for many Americans to swallow. In fact, for fiscal year 2013, the Obama administration has already requested nearly $7.6 billion in funding â€“ a five per cent increase from last year â€“Â  for weapons activities in the Department of Energyâ€™s National Nuclear Security Administration (NNSA), which oversees the US nuclear stockpile and production complex, the Arms Control Association reported in August. Ironically, bad management, poor planning and waste on the part of the NNSA have been blamed for the exorbitant projected costs of modernization. But the billions Obama has requested for the NNSA is only the tip of the nuclear modernization iceberg, as tens of billions will be necessary to renovate nuclear bombs and missiles, not to mention developing new technologies, replacing delivery systems and upgrading facilities. For example, upgrading just one of the seven types of weapons in the stockpile, the B61 thermonuclear warhead, is likely to cost $10 billion over five years, the Pentagon estimates. Another $5 billion will be needed for the W78 bomb, while $4 billion will go towards the W76. A $7 billion â€œlife extension programâ€ is also being proposed to keep the Minuteman III intercontinental ballistic missiles safe, secure and reliable until 2020, despite plans to develop a new generation of ICBMs. As for delivery systems, the SSBNX, a new submarine currently being developed to replace the Ohio-class ballistic missile submarines, is slated to cost a whopping $100 billion dollars, the Congressional Budget Office reports. Up to $60 billion has also been projected for the development of an as-yet unnamed long-range penetrating bomber. As for the facilities, renovating the buildings and laboratories connected with the nuclear production complex could cost a further $88 billion over the coming decade. At a time when Washington is lacking in either political or financial capital to sink into the countryâ€™s nuclear weaponâ€™s stockpile, passing the modernization buck is simply not an option. Ironically, US President Barack Obama won the Nobel Prize in 2009 after declaring â€œAmerica’s commitment to seek the peace and security of a world without nuclear weaponsâ€ to a jubilant crowd in Prague in April of that year. Although a subsequent 2010 Nuclear Posture Review posited the United States was prepared to reduce its nuclear arsenal to 1,000 warheads or fewer, Obamaâ€™s bold dream for a nuclear-free world is no closer to materializing two years on. Gen. James E. Cartwright, the retired vice chairman of the Joint Chiefs of Staff and a former commander of the United Statesâ€™ nuclear forces, proposed reducing the total arsenal to 900 warheads, with only half of them deployed at any given time. â€œThe world has changed, but the current arsenal carries the baggage of the Cold War,â€ he told The New York Times in an interview this past May. And while the Obama administration remains unwilling or unable to determine just how large of a nuclear arsenal the US needs to achieve its strategic aims, Republican presidential nominee Mitt Romney has lambasted it for signing the New START treaty with Moscow, which reduces US and Russian deployed strategic warheads and delivery systems. Under these circumstances, the US might not get the nuclear weapons arsenal it can afford in these harrowing economic times, regardless of who takes the White House in November. (RT News).]]>