The US Air Force confirms that they will once again launch its mysterious X-37B spy plane back into the sky, but what it will do there remains a mystery. For the third time ever, the Boeing-made unmanned aircraft will be put into orbit.

Details on the operation, as usual, remain scarce, as the Air Force remains insistent on keeping information about the aircraft under wraps. On the record, however, the agency has confirmed that the X-37B will be blasted into space next month from Cape Canaveral, Florida with the assistance of an Atlas 5 rocket.

The mission this October will mark the third instance the Air Force has tested its space-age aircraft, with its second endeavor wrapping up only earlier this year in June. The Air Force has not confirmed how long the X-37B will be in orbit during its next mission, but its last voyage lasted 469 days, more than twice the length of its first test.

For next monthâ€™s mission, the Air Force will once more use the plane that was launched into the sky during their first test run of the craft. A second craft was used for the mission that ended earlier this year.

The Air Force launched the initial X-37B under the mission name OTV-1 in April 2010 but has refrained from disclosing almost any information at all from the general public. The secrecy has in turn created concern from citizens of the United States and abroad who fear it might be engaging in surveillance missions.

Some write-ups detailing the craftâ€™s alleged ability to collect data and transmit information through heavy clouds has led some to say that it could be involved in weather research. A report carried by NBC quotes an intelligence analyst, however, who say the X-37B could very well be a harnessing that highly developed technology to spy on civilians around the world.

â€œThe satellite can see through night and through bad weather, which means that it can also zoom in to ‘countries of interest’ with great detail, like a Google Earth on serious Cold War steroids,â€ NBCâ€™s report from earlier this year alleges. 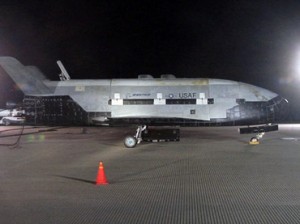 According to an Air Force press release, the rocket has been repeatedly put into orbit to â€œassure access to space for Department of Defense and other government payloads.â€ The craft itself consists of a plane nearly 29 feet long and 15 feet wide that also has a payload bay â€œabout the size of a pickup truck bed,â€ Space.com reports.

â€œOne of the most promising aspects of the X-37B is it enables us to examine a payload system or technology in the environment in which it will perform its mission and inspect them when we bring them back to Earth,â€ Major Tracy Bunko at the Pentagonâ€™s Air Force press desk tells Space.com. â€œReturning an experiment via the X-37B OTV enables detailed inspection and significantly better learning than can be achieved by remote telemetry alone.â€

Bunko says that the Air Force has not decided on an official launch date, or at least one that is publically known. (RT News)