Al-Qaeda has been blamed for a recent series of forest fires across Europe, as the head of Russia’s Federal Security Service claimed they were set by arsonists as part of the group’s low-cost attack strategy. 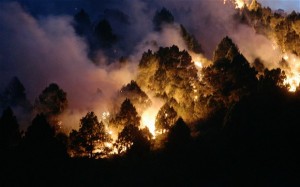 “One should note that setting fires to forests in the countries of the European Union is a new tendency in al-Qaeda’s strategy of a ‘thousand cuts’,” Alexander Bortnikov said, according to state news agency RIA Novosti, at a meeting of heads of security agencies.

In linking al-Qaeda to the deadly wildfires, Mr Bortnikov pointed to calls to launch a “forest jihad” by various extremist websites which he said also publish detailed instructions about how and where to best carry out arson.

He said it was very difficult for special services to find and prosecute such arsonists.

Deadly fires have swept through forest land in EU countries such as Portugal and Spain over the past few months, killing scores of people and forcing thousands to evacuate.

Last month, a forest fire in the Spanish region of Valencia forced authorities to evacuate around 2,000 people from their home.

More than 184,000 hectares of land in Spain alone were destroyed by fires between January 1 and September 16, according to its agriculture ministry, the highest amount in a decade.

In its continuing campaign against the West, al-Qaeda has vowed to “bleed the enemy to death” by resorting to inexpensive, low-scale attacks it refers to as a “strategy of a thousand cuts”.

In September last year David Petraeus, the director of the CIA, said that while al-Qaeda had been weakened by the death of Osama bin laden, the organisation still remained a significant threat to the US, because of a willingness to embrace these smaller-scale attacks.