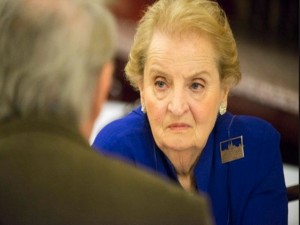 A report compiled by a committee chaired by former US Secretary of State Madeleine K. Albright has criticised the international reaction to Sri Lanka during the final stages of the conflict despite embracing the Responsibility to Protect (R2P) concept.

Released by the United States Holocaust Memorial Museum, United States Institute of Peace, and Brookings Institution, the report said that tens of thousands of Tamil civilians died at the end of the Sri Lankan civil war with little international outcry or effective UN response.

On Sri Lanka, the report says for over twenty-five years, the conflict in Sri Lanka pitted the army against the separatist insurgency of the Liberation Tigers of Tamil Eelam (LTTE). However, levels of violence escalated rapidly as the government pursued a strategy of military victory and advanced into LTTE-held territory between January and May 2009.

During this period, the civilian population suffered significant casualties and were unable to escape the conflict zone due to LTTE threats and the Sri Lankan militaryâ€™s prohibitions on movement.

The United Nations estimates that up to forty thousand civilians were killed and hundreds of thousands were displaced during the final phase of the conflict, which ended with the defeat of the LTTE and the deaths of its senior leaders.

â€œDespite the high number of civilian casualties, the international community did little beyond issuing statements of concern. The UN Security Council, High Commission on Human Rights, and General Assembly held no formal sessions on Sri Lanka during this period. In Sri Lanka, both the government and the rebels can be faulted for failing to protect civilians. However, the international community also neglected its responsibility to take timely action when it was apparent that violations of humanitarian law were taking place,â€ the report said.

It goes on to say that the case of Sri Lanka exemplifies a challenge for implementing R2P when sovereign governments confront an internal threat from a group that is designated as a terrorist organization.

â€œSince the end of the conflict, the government has steadfastly denied that the mass killing of civilians and war crimes took place. While launching its own inquiry into the militaryâ€™s actions, the government has obstructed international efforts to investigate potential war crimes and crimes against humanity. Critics question the independence and balance of the government commissionâ€™s report and argue that accountability requires a more credible investigation. If a recurrence of conflict in Sri Lanka is to be prevented, the international community should help the government respond to the needs of all communities in the country, while undertaking a national reconciliation process that addresses wounds inflicted during nearly three decades of conflict,â€ the report said.