<![CDATA[Nearly 12 years after it began, Americaâ€™s war in Afghanistan has all but approached a stalemate. Now the cost for such an outcome is once again being brought up after the number of US casualties hits another milestone: 2,000. <!--RTEditor:genereated--> 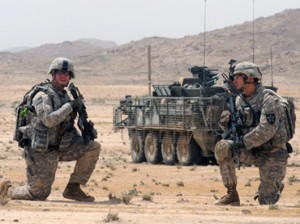 There are more than 80,000 US troops still fighting a war overseas that has been on the verge of ending since President Barack Obama took the oath of office over three years ago. But with Americaâ€™s exit from the Afghan War almost as drawn out as the operation itself, the countryâ€™s collective attention span is spent as not only support for the mission wanes, but even public acknowledgment of the endeavor and its atrocities seem to be slipping away. At the same time, though, US troops are being killed at a rate that exceeds what soldiers experience during the height of the war. As of August 22, the US Defense Department reports that 1,972 Americans have been killed in Afghanistan since the post-9/11 war began, with an additional 116 troops losing their lives in other locales, like Pakistan and Yemen, as part of the greater War in Afghanistan. Even still, exactly why the US is still in Afghanistan is being brought up less and less as young servicemen see a surge in battlefield fatalities. “We all laugh about how no one really cares,” 29-year-old Matthew Farwell tells the Associated Press this week. Farwell served in the US Army for five years , around a quarter of which was spent in eastern Afghanistan. There, he tells the AP, he received letters from grade school students that were meant for â€œthe brave Marines in Iraq,â€ and not the troops such as himself stationed in Afghanistan. “All the ‘support the troops’ stuff is bumper sticker deep,â€ Farwell says. Statistics show that Farwell isnâ€™t exactly speaking in the minority, either. The AP notes that a recent Quinnipiac University poll concluded that only 31 percent of registered voters say the US should still be in Afghanistan, with 60 percent downright declaring that America should exit Afghanistan entirely. Separately, 66 percent of Americans polled by the Associated Press this May said they opposed the war, with barely a quarter of those sampled saying they support it. Moreover, a Reuters/Ipsos poll published that same month found 88 percent of the Americans polled are in favor of taking all US combat troops out of Afghanistan by the end of 2012. Earlier this year, George Washington University law professor Steven L Schooner studied the correlation between casualties and the level of support for foreign wars, finding historically, an increase in military deaths has in turn caused a decrease in public support for those operations. He also came across something more alarming, perhaps, in that a large number of the casualties suffered by Americans overseas fall on citizens, not soldiers. â€œ[O]n the modern battlefield, contractor personnel are dying at rates similar to â€“ and at times in excess of â€“ soldiers,â€ Schooner writes in the study he co-authored with GWUâ€™s Collin D Swan. â€œFor the most part, this â€˜substitutionâ€™ has taken place outside of the cognizance of the public and, potentially, Congress.â€ â€œBy continuing to outsource high-risk jobs that were previously performed by soldiers, the military, in effect, is privatizing the ultimate sacrifice,â€ Schooner explained to the New York Times. In an address in May, President Obama said, “As our coalition agreed, by the end of 2014 the Afghans will be fully responsible for the security of their country.â€ Given Schoonerâ€™s findings, though, private contractors might continue to fight Americaâ€™s war overseas on behalf of the military, especially given the lack of support for Uncle Samâ€™s endeavors. “No one understands how to extricate ourselves from the mess we have made there,” Farwell continues to the Associated Press. “So from a purely political point of view, I wouldn’t be talking about it if I were Barack Obama or Mitt Romney either.” Fred Wellman, a 22-year-old vet who spoke out about the war to the AP this week also, says itâ€™s apparent that politicians and others are already ignoring the war as support continues to slack. “I have heard others say that the danger that their spouses or children are serving in is just simply not being cared about,” Wellman tells AP. “I think a lot of veterans feel it is just forgotten.” (RT News).]]>