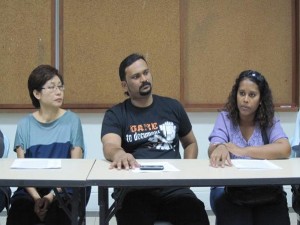 Human rights activists have condemned the Malaysian Home Ministry for raiding the private screening of a documentary depicting war crimes in Sri Lanka and arresting three activists without following due process, FZ.com reported.

They say the raid was uncalled for and accuse the authorities of intimidation.

Tenaganita executive director Irene Fernandez said that last nightâ€™s incident was purely a show of power and control by those who did not want to allow people to know how a state had become violent. And â€œcontrol and violenceâ€ seemed to be the road taken by Malaysian government.

Irene, who is also a member of civil rights defender group, Frontline Defender, said that the documentary is a form of human rights education and it is important to see how people responded to such atrocity.

And the intimidation against the audience is to stop people from attending this human rights education, she said at a press conference today.

She suggested the organisers, Pusat Komas and the civil rights committee (CRC) of KLSCAH file a formal complaint to the Human Rights Commission (Suhakam) to highlight this incident.

Three members of Pusat Komas were detained in last nightâ€™s raid by a joint team from the Film Censorship Board, Immigration Department and the police during the screening ofNo Fire Zone: The Killing Fieldat the Kuala Lumpur-Selangor Chinese Assembly Hall (KLSCAH).

The documentary by Callum Macrae tells the story of the last 138 days of the Sri Lankan civil war in 2009 and uses video evidence to show what took place in the â€œno fire zoneâ€ that resulted in the deaths of an estimated 40,000 to 70,000 civilians.

The three who were arrested were Anna Har (a member of its board of directors), Arul Prakkash (Executive Director) and Lena Hendry (Programme Officer). They were released on police bail at 2.30am today.

However, at the press conference today, they claimed that they were not told they were being arrested when they agreed to accompany the the enforcement officer from the Film Censorship Board to the Dang Wangi police station.

They were only informed that they were arrested midway through the process of giving their statements and during questioning by the investigating officers. They were questioned for three hours.

The trio are being investigated under Section 6 of Film Censorship Act for screening the documentary without obtaining approval from the board. The section says no one should screen any film or related publicity materials which is not approved by the board.

â€œWe believe the manner in which our arrests were made is also against police procedures that require the police to inform a person if he/she is being arrested. We were very shocked and amazed at the officials for carrying out this action without proper basis, proper warrants or notice being issued,â€ Har said.

Pusat Komas said it had screened many human rights documentaries over the past 11 years without problem.

Macrae, the director of the documentary, was shocked to hear about the raid and arrests. He said his intention in coming to Malaysia was to bring to the attention of the government to the awful crimes that Sri Lankan government allegedly stands accused.

â€œThe reaction from MPs to the film when they saw it in parliament I think demonstrated how powerful and important this evidence is,â€ Macrae said in a statement. A group of 10 MPs had viewed the documentary yesterday morning.

The organisers also express unhappiness with the conduct of the officers who conducted the raid last night.

The officers requested the audience to show their identity cards and wanted to jot down their particulars but following negotiation with the organisers, the agreed to forgo taking down the MyKad details.

The organisers also had to hand over a copy of the documentary to the officers.