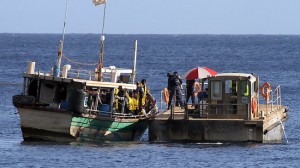 Another boat of asylum seekers has arrived at the distant Cocos Islands, chugging into the lagoon around mid-morning Sunday.

The boat – understood to be carrying 28 Tamils – is the fifth to arrive since May at the Australian territory in the Indian ocean.

A formerly abandoned quarantine station on the main island has been refurbished with fridges, washing machines and linen to accommodate new arrivals after the government conceded Cocos Islands were being increasingly targeted as an asylum destination.

The territory lies on the Australian side of halfway from Sri Lanka and is roughly 3000 km from Ashmore Reef – another Australian territory below West Timor.

With Christmas Island in the middle, this leaves open waters rough three times the size of the Nullabour plain for Australia to patrol.