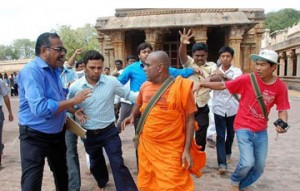 A Buddhist monk who was among a group of Sri Lankan tourists has been attacked by unidentified persons at the Central Railway Station in Chennai yesterday (17) according to Indian Media reports.

The incident occurred when the monk who had travelled on the Tamil Nadu Express from New Delhi to Chennai, had been singled out and beaten up by the unknown persons.

Indian Media reports further say that the assaulters had fled the scene following the incident.