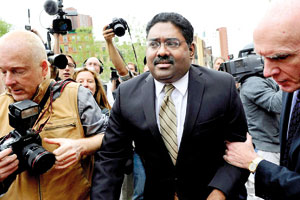 The decision by a unanimous three-judge panel of the 2nd U.S. Circuit Court of Appeals in New York was a victory for federal prosecutors, who have used wiretaps to win convictions or guilty pleas for dozens of defendants in a wide-ranging investigation into insider trading that was unveiled in October 2009. A Manhattan federal jury convicted Rajaratnam of nine counts of securities fraud and five counts of conspiracy in May 2011.

The government said Rajaratnam made as much as $63.8 million in illicit profits from 2003 to March 2009 trading on stocks, including ATI Technologies Inc, which was bought by Advanced Micro Devices Inc; eBay Inc; Goldman Sachs Group Inc; Google Inc; and Intel Corp. In challenging the wiretaps, Rajaratnam claimed an FBI agent improperly omitted information regarding the reliability of a cooperating witness when he sought a federal judgeâ€™s approval for tapping into his calls in March 2008, and appealed trial judge Richard Holwellâ€™s decision to admit the wiretaps. Writing for the 2nd Circuit, Judge Jose Cabranes said â€œwe cannot conclude that the government omitted certain information about the SEC investigation with â€˜reckless disregard for the truth.â€™â€

He said disclosing the details would have actually strengthened the wiretap application. Cabranes also rejected Rajaratnamâ€™s argument that Holwellâ€™s jury instructions on the use of information were erroneous. Patricia Millett, a lawyer for Rajaratnam, declined to comment through a spokesman.

A spokeswoman for U.S. Attorney Preet Bharara in Manhattan declined to comment. Rajaratnam, 56, is serving an 11-year prison term in Massachusetts. His firm once managed $7 billion. Holwell is now in private practice. The case is U.S. v. Rajaratnam, 2nd U.S. Circuit Court of Appeals, No. 11-4416. Courtesy – http://www.ft.lk