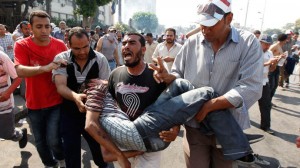 Troops have fired bullets into the crowd of pro-Morsi demonstrators marching on the Republican Guard Headquarters located on the edge of Cairo’s Nasr City. ‘At least’ three have been reported dead, amid army denials.

The shooting happened as the Islamist crowd gathered on Salah  Salem, marching towards the barracks where the deposed President  is being held. Three have been reported dead, according to AFP,  amid eyewitness accounts of several causalities.

NBC later reported that the figure stood at 4.

Supporters rallying for the reinstatement of Morsi were wounded  by gunfire as they approached, according to Reuters. One witness  informed the agency that he saw several people taken down by  shotgun pellets, suffering from injuries.

An AFP Cairo correspondent is fleeing the scene, with one BBC  journalist sustaining an injury.

As the demonstrators had approached, a small collective of men  placed a poster of Morsi atop the barbed wire barrier closing off  the military cordon. Protesters reportedly waved shoes at police   – a traditionally insulting gesture – prior to the onslaught.
“We are receiving reports that some of the protesters fired  back at Egyptian police,” said RT’s Paula Slier, based in  Cairo.
Egypt’s security sources are denying that any people were killed  following the clashes, announcing on state radio that there have  been no deaths in the barrage of bullets.

An army spokesperson said that only blank rounds and teargas were  used against the protesters, according to Reuters. It is unclear  whether security forces were present at the scene who did not  belong to the army. A media spokesperson for the Muslim  Brotherhood, Gehad El-Haddad,  said that any shootings had  been at the hands of the neighboring military police.

Thousands of Morsi supporters have been gathering across  several locations in Cairo in response to Egyptian President  Mohamed Morsi’s ousting by the on Wednesday following  anti-government protests.

The groups have been assembling in response to a call by the  alliance of Islamist parties – which included Morsi’s Muslim  Brotherhood, for peaceful protests to condemn the ousting.

“There certainly is a feeling that history is repeating itself   – you need to remember that it was just two years ago that the  former Egyptian president Hosni Mubarak was overthrown. What  people here on the streets are saying is we’re witnessing another  overthrow, and the point is being made is that this was a  democratically elected president,” said Slier.

In Cairo, supporters took to the streets at Cairo University and  Istiqama Mosque in nearby Giza Square, as well as in the Cairo  district of Heliopolis, not far from the Ittihadiya presidential  palace in addition to the Nasr City district action.

The capital hasn’t been the sole location of the demonstrations:  Unrest swept the northern cities of Alexandia and Beheira  following Friday afternoon prayers. (RT News).