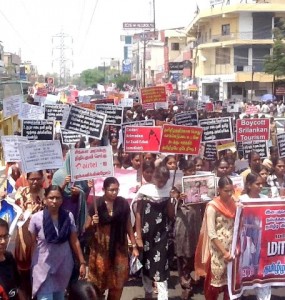 Dozens of Australian Tamil youth will commence a 24-hour fast today at 6pm at Prince Alfred Park (Parramatta, NSW) to show solidarity with the students in Tamil Nadu, India who have embarked on a hunger-strike in protest of the weak wording of the US-led draft resolution on Sri Lanka at 22nd UN Human Rights Council (HRC) Session.

The Fast-in-Solidarity is to express solidarity in the fundamental principle of justice and an independent homeland for the Eelam Tamil people, and support the demands set out by the Tamil students currently on hunger-strike in Tamil Nadu which include:

– An independent International inquiry into alleged War Crimes monitored by the UN;

– A UN-led referendum (amongst the Tamil Diaspora and the Tamil people living in the Northern and Eastern provinces of the island of Sri Lanka) for an independent Tamil homeland;

“We agree…that the events unfolding in Sri Lanka are far more sinister than war crimes and violations of human rights, but a systematic coordinated act of genocide,” says a statements issued by the organisers. “We join in their criticisms of the UN HRC draft resolution on Sri Lanka and agree that it fails to acknowledge and address the ongoing and systemic oppression and genocide of the Eelam Tamil people…We, through our Fast-in-Solidarity, unite with our Tamil brethren in Tamil Nadu to call on India and other UN member states to support the need for an international independent investigation into the war crimes and crimes against humanity in Sri Lanka, and a UN-led Referendum on Tamil Eelam,” it further added.

The event is endorsed by all leading Australian Tamil youth and students organisations.