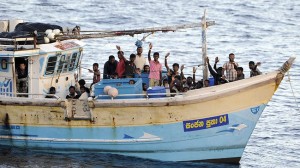 More than 50 Australia-bound asylum seekers from Sri Lanka have refused to leave their boat after it was found stranded off Indonesia’s Sumatra island a week ago. Local police say the boat, with 53 people onboard, was found drifting near small Mentawai island off Sumatra on September 1 after it ran out of fuel. “They refused to get off the boat, saying that they want to continue their journey to Christmas Island (Australia). They want 2,000 litres of fuel to sail back to sea,” Sikakap district police chief Surya Negara told AFP. In a letter to a local immigration office, the asylum seekers threatened to go on hunger strike, saying “we will not eat until we die”. Mr Negara said local authorities have been in touch with the International Organisation for Migration (IOM), but as the island was so remote, it takes time to reach the location. “Up until now, they refused food or medical treatment. But based on our observation they still have enough food on their boat,” he said. Indonesia has long been a transit country for illegal migration to Australia. Hundreds of boatpeople have died en route to the country this year. AFP]]>