The bombs, the deadliest to hit India in two years since 13 were killed outside the High Court in New Delhi, exploded about two minutes apart outside a cinema and then a pedestrian bridge near a bus stand in Dilsukh Nagar, a busy commercial district in the old part of the city, shortly after 7pm local time. 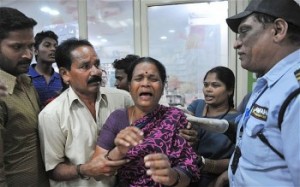 Police said the explosives were kept in tiffin boxes on bicycles near busy spots.

Emergency services reached the spot to evacuate the injured. More than 50 injured people have been refereed to hospitals, many of them in critical condition.

Sushil Kumar Shinde, the home minister, said authorities had received intelligence in recent days about the possibility of attacks, which was shared with other state.

Mahesh Kumar, a 21-year-old student, was heading home from a tutoring class when a bomb went off.

â€œI heard a huge sound and something hit me, I fell down, and somebody brought me to the hospital,â€ said Mr Kumar, who suffered shrapnel wounds.

The blasts came on the same day as Indiaâ€™s parliament opened for its key budget session, amid tensions following the hanging earlier this month of the Kashmiri separatist, Mohammed Afzal Guru.

The execution of Guru, who had been convicted of helping to plot a 2001 attack on the Indian parliament that left 10 people dead, had sparked protests in the disputed Muslim-majority region of Indian Kashmir.

India has made efforts to improve domestic security since the 2008 Mumbai attacks, in which 10 Islamist gunmen laid siege to the city, killing 166 people.

But experts say security forces still suffer from weak intelligence-gathering at the grass roots. (The Telegraph)