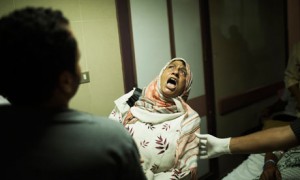 On several floors of Cairo’s Health Insurance hospital, room after room was filled with bloodied, moaning protesters, many of them waiting to be treated. Supporters queued up to donate blood as doctors rushed more wounded past them on stretchers. Security officials screamed at journalists to leave; families of victims implored them to stay.

By the end of Monday at least 51 protesters had died and more than 400 had been injured in one of the bloodiest incidents in Egypt‘s recent history.

It began, according to the wounded, as dawn prayers were ending. Hundreds of members of the Muslim Brotherhood, supporters of the deposed president, Mohamed Morsi, had knelt inÂ  Salah Salem Street, one of Cairo’s main thoroughfares, outside the headquarters of Egypt’s Republican Guards at first light on Monday when the imam’s chants were shattered by the sound of gunshots.

“It was like pouring rain,” said Mohamed Atia, one of the hundreds injured in the subsequent bloodbath, speaking in hospital. A pool of dried blood darkened his once-grey trousers, the gunshot wound to his shoulder still awaiting medical attention. “They started shooting teargas and then live ammunition. We were shouting ‘peaceful, peaceful’, but the shooting continued.”

Mohamed Saber el-Sebaei lay with a dirty bandage around his head, blood caking his eyes shut. “There were dawn prayers and then I heard someone calling for help, so the imam finished the prayers quickly,” he said.

“Just before we finished, the shooting started. The army units that were standing in front of the Republican Guard headquarters first started shooting teargas, then live ammunition above people’s heads â€¦Â  I was taking cover with another guy behind some rubble and I felt something hit my head. I held my prayer mat in my hand and I started to cover my head with it. But I couldn’t stop the bleeding because there was so much blood.”

A third injured man, Abdel Aziz Abdel Shokor, crippled by a live round to his leg, swore that no one had provoked the assault. “I swear to God no one was doing anything,” he said. In post-revolutionary Cairo, now more divided than ever after the toppling of Morsi last Wednesday, the narrative of history is rarely straightforward. On Monday the city was awash with claims and counterclaims about whether the bloody events had been provoked.

According to the army, a thousand pro-Morsi supporters had been camped outside the guards’ compound since Thursday, protesting at the overthrow of Morsi, who was reportedly under house arrest inside. About 4am, the army said, an armed group of Morsi loyalists attacked the compound, first with stones, then with live ammunition.

The army had no choice but to return fire, a spokesman said in a heated afternoon press conference. At least one security official was killed.

Even at the site of the incident, no one could agree how it started. Videos showed armed Islamists later continuing the fight in the streets, leading to a nearby pro-Morsi sit-in.

But there was no conclusive evidence that either the army, the police or Morsi supporters fired the first shot.

Those at the hospital claimed the massacre began after a soldier was shot by friendly fire. But at the area near the Republican Guard building, which is inhabited mainly by ex-military families, some local residents strolling the now empty and debris-strewn protest site said it was started by armed Islamists.

“After prayers somebody came here and said ‘jihad, jihad’,” claimed a man who said he was a friend of both Hosni Mubarak and Mubarak’s last prime minister Ahmed Shafiq. “Armoured trucks came and somebody shot one officer and two soldiers. Then people got really crazy broke off part of the barbed wire by the presidential guard and then [the soldiers] started firing teargas and live fire.”

There were women and children among them, the man admitted, as well as people not interested in fighting. At least 100 fled into the nearest residential tower block, banging on any door they could find, asking for shelter and vinegar â€“ a homemade remedy for teargas. The residents put them on the roof until the police arrived to arrest them. One petrified 11-year-old was still there by the afternoon.

An ex-policeman who said he lived on the 11th floor of a building overlooking the site said the army and police had not fired a single bullet. “All this time there was no live ammunition, just teargas,” he said. “I saw this with my own eyes. No one was killed. It was protesters running back who started burning their own tents. As you can see there is no blood or ammunition.”

Officials were in the middle of a large-scale cleanup, but the Guardian found a live military round among the detritus. Metres away stood a car with two bullet-holes and an exit hole. “I saw people being carried away from here in blankets, and people later washed the blood off. They were shot, they fell, and they got carried away,” admitted a man who gave his name as Mohamed â€“ in testimony that contradicted that of his neighbours.

One thing they all agreed on was the attitude of the protesters. “They’ve been here for three days,” said Mohamed, “and they’ve been treating the soldiers very disrespectfully.”

Hours later, many of those same protesters were still arriving in bodybags at Cairo’s Zeinhom morgue. (The Guardian)