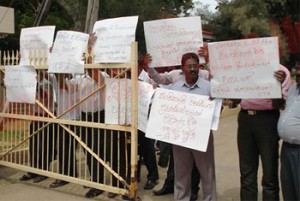 Mano Ganesan, leader of the Democratic Peopleâ€™s Front and convener of the Civil Monitoring Commision (CMC), stated that students of the Jaffna University, who were arrested in Jaffna, have reported to the CMC. According to a press release from the CMC, two students, Paramalingam Dharshananth and Ganeshalingam Sutharshan from the Art and Medical faculty respectively, were arrested as early as 1.30 am today. Also Jaffna district Kopay police have arrested Kanagasabapathy Jenami Jeyan of the Art Faculty and Shanmugam Solomon of the Art Faculty, yesterday (31) noon. Previous reports stated that the army allegedly entered the student hostels and threatened some of the students with firearms. A protest against this threat, which took place the next day, came under attack. In this melee, a vehicle of MP Saravanabavan was damaged. And the editor of the Uthayan newspaper is said to have been physically attacked. The army accused the students of conducting Remembrance Day inside the University of Jaffna. A protest against the attack on university students was also held by University lecturers at the university entrance.]]>