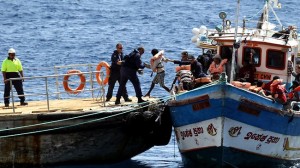 The Tamil refugee Ranjini â€“ incarcerated when pregnant after the Australian Security Intelligence Organisation (ASIO) branded her a security threat â€“ had the first chance to put her side of the story on Wednesday to a retired judge examining her case, the Young Witness website reported today.

In what is seen as the main chance of release for Ranjini and her three sons, the independent review by former federal court judge Margaret Stone comes as supporters are hoping hundreds of protesters will turn out at rallies to mark the first anniversary of her detention.

Ranjini has the highest profile of 55 refugees locked inside Australiaâ€™s immigration centres â€“ some for up to four years â€“ who are unable to return home as they have been officially recognised to have a well-founded fear of persecution, but no other country is willing to accept them.

The Gillard government has refused to issue visas to the 55 after the adverse ASIO assessment, in effect consigning them to indefinite detention.

They are not permitted to know the detail of the ASIO allegations against them or to appeal the findings.

Ranjini gave birth to a son, Paari, in January after being taken into custody in May 2012. A widow from Sri Lankaâ€™s civil war, she had lived freely in Australia for more than year beforehand and remarried in Melbourne.

An ombudsman report warned in March that her other children had suffered from trauma and her oldest son had shoved sticks into his ears.

Justice Stone was asked by then attorney-general Nicola Roxon in October to review the ASIO assessments of the 55 cases after a High Court challenge to indefinite detention and months of back-bench pressure.

Justice Stone is allowed full access to the secret ASIO files, but a Labor-dominated senate report raised concerns last month that her recommendations are not binding.

A broad outline of the ASIO assessment, stripped of any secret intelligence, was provided to the refugees in recent weeks as part of the review, but legal experts said this was not sufficient to allow them to respond to the allegations.

Mr Manne declined to comment and said the process needed to take its course, the Young Witness website reported.

Refugee advocates will hold protests calling for the release of the 55 across Australia on Friday, including in Footscray, Dandenong and the Melbourne CBD, as well as Geelong and Ballarat.

Organiser Trevor Grant from the Tamil Refugee Council said hundreds were expected at the rallies.

Anthony Bieniak, who runs lettersforranjini.com to draw attention to the plight of those in indefinite detention, said he had recently had more than 280 letters in support of Ranjini from the public.

A spokeswoman for Justice Stone said it was unfortunately not possible to give a timeframe for completion of the reviews due to the varying amount of material and other factors beyond her control.

Attorney-General Mark Dreyfus said last week the first group of reviews should be complete within weeks.