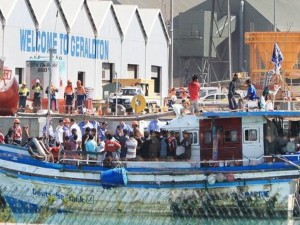 Australia says another 41 Sri Lankans have been sent back home taking the number to almost 1250 Sri Lankans returned since last August.

Immigration Minister Brendan Oâ€™Connor confirmed the 30th plane had landed in Colombo with 41 on board since the Government began flying Sri Lankans back in August last year, the Herald Sun reported.

It brings to 1247 the number of Sri Lankans who have been sent home after it was deemed they were not genuine asylum seekers.

Among them, 1035 were returned involuntarily.

â€œThe return of another group to Sri Lanka sends a clear message that those who pay smugglers are throwing their money away and risking their lives in the process,â€ Oâ€™Connor said.

â€œWe are committed to breaking the evil people smuggling trade, deterring people from taking dangerous journeys by boat and saving lives at sea.â€

It comes as search operations for two boats lost at seas failed to find survivors this week.

Meanwhile, another boat with 107 passengers and three crew has landed on Christmas Island, the Herald Sun reported.

The boat was detected by the Christmas Island radar north of the island on Wednesday.