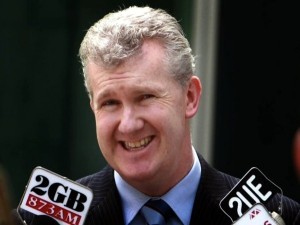 Australian Immigration Minister Tony Burke says he is working to get a 11-year-old Sri Lankan boy out of a Tasmanian detention centre as quickly as possible.

ABC news reported that the Sri Lankan child is being held at the centre at Pontville, near Hobart, along with two older cousins.

Burke visited the centre last week at met the boy.

He says he wants to move the boy out of the centre quickly, but a community detention spot must be found for the child and his cousins.

â€œIâ€™m reluctant to break up that family group,â€ he said.

The Pontville centre has been used to detain almost 300 unaccompanied minors from places like Afghanistan, Vietnam, Iran and Sri Lanka.

Burke says he cannot pretend the setting is ideal for younger children long-term.

â€œI had a look at where they are staying in Pontville and theyâ€™re separate to everybody else,â€ he said.

â€œTheyâ€™ve got a little setting where it is bedrooms for the three of them. Iâ€™m not pretending it is what we would want as permanent accommodation.

â€œBut right now we want to wait till we can get a community place so we can move all three people together.â€