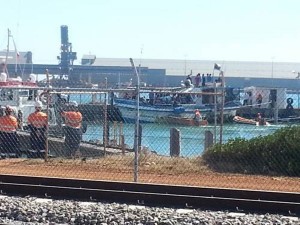 To create awareness and deter people from undertaking dangerous voyages by sea, the government was committed to breaking the people-smuggling trade, Australiaâ€™s Consul-General to South India, David Holly, told reporters in Chennai.

â€œAnyone who arrives by boat and who does not engage Australiaâ€™s obligations, including Sri Lankan nationals residing in India, will be returned to their country of origin. Last year, 1,177 Sri Lankan refugees, including women and children, were sent back home,â€ he said.

According to Holly, each year about 20,000 refugees from different parts of the world, especially Sri Lanka, Afghanistan, Iraq and Iran tried to enter Australian territory by reaching Christmas Island by boats. They got stranded in the mid-sea due to lack of water, fuel and food.

After duping the Indonesian authorities, operators would proceed towards Christmas Island, which belongs to Australia and is located between Australia and Indonesia. To attract the attention of the Australian authorities, the boat would be toppled a short distance away from the shore so that they could be rescued. This often resulted in loss of lives in great numbers.

Due to strict vigil maintained by the State police, Sri Lankan refugees have started sailing from Kochi and Mangalore. The Tamil Nadu Police had foiled several attempts in the recent past. A vessel was intercepted in mid-sea near Indonesia after 55 days of sailing, Mr. Holly said.