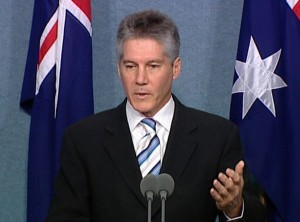 The Australian oppositionâ€™s call for a crackdown on Sri Lankan asylum seekers is â€œextraordinaryâ€ and â€œhypocriticalâ€, Australian Defence Minister Stephen Smith says. The opposition on Sunday urged the federal government to reach an agreement with Sri Lanka for the immediate return of people intercepted en route to Australia. In a joint statement, opposition foreign affairs spokeswoman Julie Bishop and immigration spokesman Scott Morrison said those who made it through should be immediately sent back to Sri Lanka, without setting foot on Australian soil. The call came after Australian authorities intercepted a boat carrying 81 suspected asylum seekers apparently from Sri Lanka, north-northwest of the Cocos (Keeling) Islands on Saturday. â€˜Firstly, the suggestion is in breach of the Refugee Convention and in breach of international law,â€™ Smith told reporters in Perth on Monday. â€˜Secondly, this is the political party who said that they couldnâ€™t authorise the Malaysian arrangement because Malaysia was not a party to the refugee convention. â€˜So I find it both extraordinary and hypocritical. â€˜We have an obligation under the convention and an obligation under international law to process someoneâ€™s application for asylum if they make it.â€™ Mr Smithâ€™s comments echoed those made by Immigration Minister Chris Bowen on Sunday.Â  (Agencies)]]>