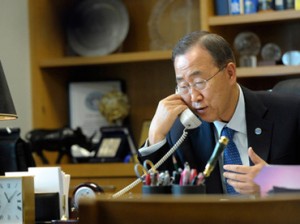 Ban Ki-moonâ€™s spokesman Martin Nesirky said that the UN Chief was aware of the new video footage released on the war in Sri Lanka and the reports about that video footage.

He was referring to the video allegedly showing the youngest son of LTTE leader Vellupillai Prabakaran having snacks in an army bunker before being shot dead.

Nesirsky however said that the UN did not have any comments at this moment directly related to the controversial video.

â€œThe Secretary-General has consistently underlined the critical importance of addressing accountability in Sri Lanka through a genuine and comprehensive national process and achieving national reconciliation.Â  We are obviously aware of the video footage and the reports about that video footage, but I donâ€™t have any specific comment on that,â€ he said.

Meanwhile, in response to a question, the UN spokesman said that the last panel appointed by Ban ki-moon to look into addressing failures of the UN during the war in Sri Lanka is not investigating the incidents in Sri Lanka related to the war.

â€œThis is an internal task force looking at how recommendations will be carried out within the UN.Â  Itâ€™s not to do with looking into the actual events that took place in Sri Lanka.Â  It is learning the lessons from them, which is what the second report was about,â€ he said.