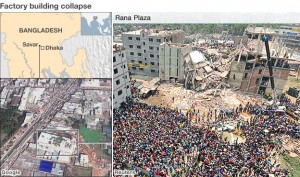 The army in Bangladesh says 804 people have been confirmed dead after the collapse of an eight-storey factory building near the capital Dhaka.

Authorities are continuing to search the rubble for more bodies two weeks after the Rana Plaza building collapsed on 24 April.

Several people, including the building’s owner, have been arrested.

Many of the bodies recovered on Wednesday were so decomposed, they were being sent to a lab for DNA identification, the AP news agency reports.

Officials say about 2,500 people were injured in the collapse and that 2,437 people have been rescued.

Bangladesh has shut down 18 garment plants for safety reasons since the Rana Plaza disaster, the Bangladeshi textile minister has confirmed.

“We have seen that those who claim to be the best compliant factories in Bangladesh have not fully abided by building regulations,” he added.

The move follows Monday’s government announcement that a panel would inspect garment factories for building flaws.

Bangladesh has one of the largest garment industries in the world, and some of the clothes produced in the building were made for Western retailers.

The EU has said it is considering “appropriate action” to encourage an improvement in working conditions in Bangladesh factories. (BBC)