Bashar al-Assad has vowed to “live or die” in Syria, warning against any foreign intervention in the crisis and defending his war-torn country as the “last stronghold of secularism and stability” in the region. 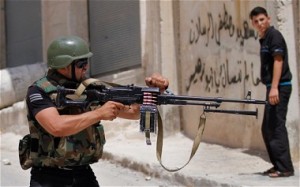 Speaking to Russia Today TV, the Syrian president made clear he had no intention of fleeing abroad â€“ just days after David Cameron suggested he could be offered “safe passage” if he stepped down.

“I am not a puppet. I was not made by the west to go to the west or to any other country,” Assad said during the interview, to be broadcast on Friday. “I am Syrian, I was made in Syria, I have to live in Syria and die in Syria. I do not think the west is going [to intervene], but if they do so, nobody can tell what is next. I think the price of this invasion if it happened is going to be more than the whole world can afford.”

Assad’s unwavering message â€“ albeit via an interviewer from a country that backs his government â€“ contrasts with the disarray among members of opposition groups meeting in the Qatari capital, Doha, for what was supposed to be a drive for the greater unity urgently demanded by western countries.

It also seemed intended to signal to a re-elected Barack Obama, struggling with the Syrian crisis as he contemplates his second term, that Assad does not plan to change tack despite international condemnation of a policy that has cost an estimated 35,000 lives in the past 20 months.

But the gravity of the situation was underlined, as it is daily, by new reports of violence across the country.

The International Committee of the Red Cross also said it was unable to cope with the needs of a growing number of refugees. “The humanitarian situation is getting worse despite the scope of the operation increasing,” said Peter Maurer, its president.

In Doha, there was confusion and uncertainty about the outcome of a meeting of the Syrian National Council (SNC), the main foreign-based opposition group. It chose a new secretariat, with gains for the Muslim Brotherhood which were described by the commentator Malik al-Abdeh as an “aggressive takeover”. But the election of a new leader was delayed until Friday to allow four members representing women and minorities to be added.

Riyad Seif, a west-backed veteran dissident, failed to be elected. Seif launched a more inclusive Syrian “national initiative” to subsume the underperforming SNC and take in other groups, especially those representing activists on the ground.

His plan called for the creation of a supreme military council and a transitional government-in-waiting â€“ along the lines of Libya’s Transitional National Council, which effectively galvanised international political and military support for its successful battle to topple Muammar Gaddafi last year.

The hope is that a military council could establish a monopoly over both strategy and weapons â€“ amid concern that arms are now flowing more freely to extremist Salafi or jihadi groups supported by wealthy Gulf Arabs. If it is united and credible enough, the theory goes, the opposition would eventually be able to negotiate a political transition for a post-Assad Syria.

Britain’s representative to the opposition, Jon Wilks, said he was staying in Doha, with other diplomats from the Friends of Syria group, to try to help forge agreement. Wilks sought to put a positive spin on what was widely seen as a disappointing outcome, saying: “The Syrian opposition have recognised the need to build bridges between the SNC and others, particularly internal [groups].

“Also urgency of building opposition strength given the worsening crisis and western donors’ needs for a technocratic body to manage our aid. The decision must be Syrian. But our message is that we need decisions on these vital issues in coming days.”

Anti-Assad Syrians were scathing. “I think the SNC should form a revolutionary court and execute itself,” tweeted the exiled activist @BSyria. Rafif Jouejati of the grassroots Local Co-ordination Committees, commented acidly: “We once had to beg Assad for reforms. Now we’re begging SNC for reforms.”

Others complained that Seif initiative had created only infighting and further weakness. (RT News and Guradian)