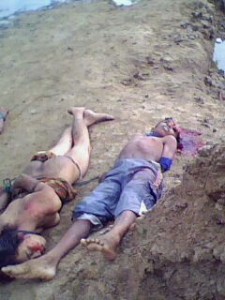 The Commander of the Rajapaksaland who ordered the massacre of thousands of Tamils a few years back has taken immediate steps to stop the killing of hundreds of goats in Munneswaran. At the time, the Commanderâ€™s brother and Sarath Fonseka used their soldiers to carry out the orders and finally handed a scroll saying all was done, which also signed off the death certificates of a hundred thousand Tamil who were killed. The smell of human blood still lingers in the Wanni and the Tamil were killed without any consideration that is now being given to goats that are to be sacrificed. Tamils were tortured, raped and photographed through mobile phones. Prince Namal has now flow down sacred relics. No sacred relic was flown down earlier to save the lives of the Tamils. The powers of the sacred relics had created humaneness in the Commander and he has now stopped the killing of goats. People have worshiped the leader who has killed Tamils. People worship the king who has topped the killing of goats. The goats are now free on a Royal directive. Hence, it is better to be a goat in Sri Lanka than a Tamil. (LNW).]]>