The latest James Bond movie – Skyfall opened this weekend in 25 global markets, taking in a total of $77.7 million between Friday and Sunday. 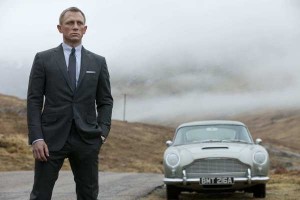 Skyfall is just behind last year’s final Potter movie, Harry Potter and The Deathly Hallows – Part 2, which took 23 million pounds in its first weekend in Britain.

That is the biggest opening weekend for any of the 23 Bond films.

The film, which stars Daniel Craig as agent 007 and Javier Bardem as a villain bent on revenge, opens in the United States on November 9.

So “Skyfall” is about MI6, and Bond and M, and all their changing roles. In Mendes’ telling, the intelligence service is on the defensive from a hostile government bureaucrat played by Ralph Fiennes. (Mendes declined to comment for this article.)

MI6 is also facing a nefarious threat from Bardem’s Raoul Silva,  a former agent with cyber-skills who felt betrayed by M years before. Silva sports light-colored suits, a creepy blond dye-job and all manner of vocal tics.

“This a guy who’s rotten inside,” Bardem smirked. “So of course he looks like an angel.”

For many, the Bond series holds a place in the heart like no other. But nostalgia can have a distorting effect.