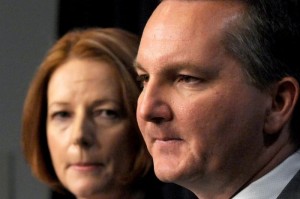 The Federal Government and refugee advocates have lashed out at the Opposition’s plan to deport all Sri Lankan asylum seekers, saying it breaches human rights. The Coalition says Government should sign a new treaty with Sri Lanka, so its citizens can be sent home before they get access to the Australian legal system. Deputy Opposition Leader Julie Bishop says many Sri Lankan asylum seekers are economic migrants, not refugees, and the civil war in the country is over. “If the Government grants people from Sri Lanka refugee status, the Australian Government is accusing Sri Lanka of persecuting their own citizens,” she said But Immigration Minister Chris Bowen says Australia has a duty to consider asylum claims under the United Nations Refugee Convention. “Now what I think you hear is the sound of goalposts moving,” he said. “They’re becoming more shrill and more ridiculous. “This is an extraordinary call from the Opposition and what they’re effectively doing here is calling for us to remove ourselves from the Refugee Convention. “There is no other conclusion that can be reached.”

This is an extraordinary call from the Opposition and what they’re effectively doing here is calling for us to remove ourselves from the Refugee Convention.
Chris Bowen

Refugee advocates agree the plan would breach human rights. Pamela Curr from the Asylum Seeker Resource Centre says the Coalition is just trying to appear tougher than the Government. “We have had extremes in the past but what we’ve got now is extremely scary in that we’ve got a Government and Opposition in a competition to see who can be the toughest, the meanest on asylum seekers,” she said. Ms Bishop remains convinced the plan has merit, and says it would support Sri Lanka’s efforts to stop people smugglers. “Sending back Sri Lankans intercepted at sea would send a very strong message of deterrence for people looking at getting on these very hazardous journeys,” she said. “And it would send a very strong message to the people smugglers that they cannot ply their trade out of Sri Lanka.” Ms Bishop’s comments came after it was revealed Indonesian police are holding around a group of Sri Lankan asylum seekers whose boat broke down on the way to Australia. The 50 Sri Lankan asylum seekers, including seven children, were discovered adrift by fisherman near the Mentawai Islands. After nine days at sea, they were dehydrated and hungry. They told their rescuers they were fleeing violence in Sri Lanka and and had hoped to reach Australia. The fishermen towed them ashore where they were given food, water and medical attention and handed over to police. Earlier on Sunday, Greens Leader Christine Milne told ABC’s Insiders program that authorities need to better advertise Australia’s increase to the refugee intake. “Let’s get into the camps and tell people not to get on the boats because the humanitarian increase is coming in and they will soon be able to get safe passage to Australia. That’s what they need to hear,” she said. “The Prime Minister said 20,000 places will be made available, and we are doing everything in our power to bring that forward so that people have got the promise of a safe pathway.” Meanwhile a coalition of Australian church leaders has called on the Government to further increase its refugee intake. Leaders from denominations including the Salvation Army and Anglican, Catholic and Uniting churches say they are concerned about the Government’s new legislation to allow offshore processing. President of the Uniting Church, Reverend Andrew Dutney, says offshore processing can be traumatic for those involved. “It’s too late to change the legislation at this point and we accept that but there are other things to consider so we’re very concerned that there be a genuine commitment to follow through on all of the recommendations of the Houston report including the increase of the numbers of asylum seekers and refugees to be accepted in the program,” he said. A panel chaired by former defence force chief Angus Houston recently recommended increasing Australia’s annual humanitarian intake from 13,000 to 27,000 refugees within five years. (ABC)]]>