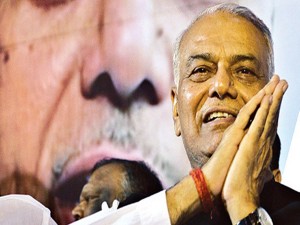 Addressing a hall meeting on the Sri Lankan Tamils issue in Chennai, Sinha said India was the pivot of the Commonwealth body. â€œIf India does not go there, CHOGM cannot be held,â€ he said.

The Indian media report said that the BJP leader also called for the suspension of Sri Lanka from Commonwealth membership by the Commonwealth Ministerial Action Group for violations of the Harare Declaration. â€œThe CMAG is responsible for protecting democratic values and any country which acts in violation of those norms or human rights can be suspended if allegations are proved,â€ he said. â€œThis is where India should take action and see that Sri Lanka is suspended.â€

Praising the State unit of his party, the student community and the film fraternity for spearheading a movement for Lankan Tamils, the Rajya Sabha member said the issue of Tamils in the island country was a national issue and not of one state alone. â€œIf a BJP-led government comes to power, we will implement our policy.â€ At the same time, he also cautioned that any future action should be taken with care so that the interests of the Tamils were not further endangered.

Taking at a dig at â€œthose who have remained unperturbed and undisturbed,â€ when the photograph of slain LTTE leader V Prabhakaranâ€™s son was published, he said the boy had fallen like a man with bullet wounds on his chest: â€œThat is the spirit of the Tamils of Sri Lanka.â€

Drawing a sharp contrast between the policy of the Atal Bihari Vajpayee-led NDA government and the Congress-led UPA coalition on the issue, the former foreign minister said there was a ceasefire between the then Lankan government and the LTTE when the BJP came to power. â€œWe made it clear to the Sri Lankan government that it had to be a peaceful, negotiated settlement and that India will not agree to a military solution.â€ Claiming that Colombo accepted New Delhiâ€™s advice, he said a ceasefire came into effect in 2002.

When the Congress-led UPA came to power in 2004, the intention from the beginning was to play second fiddle to the Lankan government. Stating that there can be no parallel between the situation in Sri Lanka, which is an internal uprising, and Kashmir, which is facing external aggression, Sinha stressed that New Delhi should also shed fears that if it was â€œtoo harshâ€ on Colombo, China would then move in. â€œChina is already all over the place. What is it we have achieved?â€ he asked.

Calling for an India-sponsored resolution at the UNHRC, he said Lanka should vacate all its forces from the north and eastern provinces of the island. Elections should be held at the earliest under international supervision. There should be an independent inquiry of the atrocities committed against the Tamils.

Refraining from extending any overt support to the demand for a separate Tamil Eelam, he pointed to Bangaldesh, East Timor and North and South Sudan, where people overthrew suppressive regimes and warned Rajapaksa to reform.