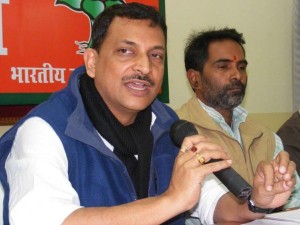 The main Indian opposition BJP says it will not support a resolution on Sri Lanka in the Indian Parliament.

Rajya Sabha MP Rajiv Pratap Rudy told NDTV that such a resolution will be seen as mainly to keep the Indian government alive and not because of the issue on Sri Lanka.

His comments came after the Indian government said a resolution on Sri Lanka is likely to be submitted in the Indian Parliament this week.

The resolution was seen as an attempt to pacify the M. Karunanidhi led DMK which late this evening formally handed over letters withdrawing from the Indian coalition government over the Sri Lankan issue.

A Zee news report said that senior DMK leader TR Baalu met President Pranab Mukherjee this evening and handed over to him the letter withdrawing support to UPA government.

Meanwhile, the DMK ministers will submit their resignations to the Prime Minister tomorrow.

Baalu said the party will decide the future course of action after seeing the draft resolution on Sri Lanka.

Ahead of DMK leadersâ€™ meeting with the President, the Congress Core Group also held a meeting to discuss the situation.

The DMK move makes the government vulnerable despite its assertions of having a Parliamentary majority.