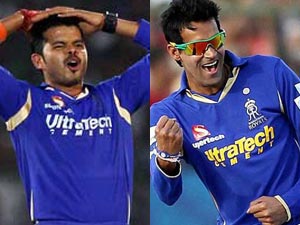 In a sensational revelation it was learnt that the Rajasthan Royals players, who were allegedly involved in spot-fixing in IPL, were supplied with women by the bookies.

According to TV reports, the transcript of the taped conversations between the players and the bookies revealed that the bookies used to arrange women for those players involved in spot-fixing.

It was also reported that when S Sreesanth was arrested from a Mumbai hotel, he was found along with a girl in his hotel room.

The transcript also revealed that another player who is not involved in spot-fixing also availed the escort service provided by the bookies.

On Thursday paceman S Sreesanth and two other bowlers belonging to the Rajasthan Royals IPL team who were arrested for spot-fixing, received up to Rs 60 lakh for one over for giving away runs as per arrangements with bookies with underworld connections abroad.

The sensational arrests of the three players in the early hours of the morning on Thursday in Mumbai by the Special Cell of Delhi Police has cast a shadow over the ongoing IPL tournament and the players have been suspended by the BCCI.

At a crowded press conference here, Delhi Police Commissioner Neeraj Kumar said that the Special Cell had hundreds of hours of recordings of phone conversations between the players and bookies, 14 of whom have also been arrested. More arrests are on the anvil but the role of no other player, Indian or foreign, has come to light.

The players and bookies, who have been brought to Delhi, have been charged under section 420 (cheating) and 120 (b) (criminal conspiracy) but they are also likely to be booked under the stringent MCOCA, Maharashtra Control of Organised Crime Act, which could land them in jail without bail and their confessions before a DCP level officer will be admissible in court.

Kumar gave a detailed account of the conversations that took place between bookies and the arrested Rajasthan Royals players — Sreesanth and spinners Ankeet Chavan and Ajit Chandila.

Kumar revealed explosive details of the modus operandi followed by bookies and the cricketers, giving audio-visual proof of three IPL matches which were manipulated.

Kumar revealed how bookies gave the caught players specific approval codes which were used to signify a compromised over during the matches.

Meanwhile, Tainted Rajasthan Royals cricketer Ankeet Chavan, accused of spot-fixing in the Indian Premier League, confessed on Friday for his role in fixing to Delhi Police special cell.According to TIMES Now, Chavan’s immediate reaction when he was questioned by Delhi Police was, “I did wrong”.

However, Deepak Prakash, Sreesanth’s lawyer, has said that the Kerala pacer has no knowledge about spot-fixing and is being framed.

The lawyer further added that Sreesanth is innocent, all allegations against him are baseless and they will apply for the bail on Saturday.

The criminal case registered by the Delhi police against the three Rajasthan cricketers for alleged “spot fixing” stands a good chance of yielding the first ever conviction in India for a sporting crime.