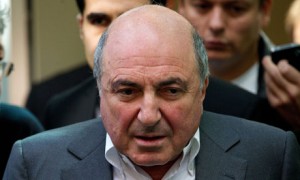 The Russian oligarch and fierce Kremlin critic Boris Berezovsky was last night found dead in his Berkshire home at the age of 67.

The circumstances of his death were unclear, although there were unconfirmed claims that the former power-broker of Russian politics had killed himself.

Berezovsky’s death comes only months after he lost a high-profile and personally disastrous court case against fellow Russian oligarch Roman Abramovich. He had accused the Chelsea football club owner of blackmail, breach of trust and breach of contract in relation to a Russian oil company. After the claims were dismissed, he was ordered by the high court to pay Â£35m of Abramovich’s legal costs.

His financial difficulties were recently further exacerbated after his former mistress Elena Gorbunova, 43, claimed that Berezovsky owed her $8m (Â£5m) in compensation over the sale of their $40m residence in Surrey.

News of Berezovsky’s death emerged on a Facebook post yesterday that appeared to have been made by his son-in-law, Egor Schuppe. According to the post, Berezovsky was recently depressed and had failed to keep in touch with friends, often choosing to stay at home rather than socialise.

Aleksandr Dobrovinksy, head of the Moscow-based Alexander Dobrovinsky & Partners law firm, claimed on his social network page that the 67-year-old former billionaire had killed himself. The statement read: “Just got a call from London. Boris Berezovsky committed suicide. He was a difficult man. A move of disparity? Impossible to live poor? A strike of blows? I am afraid no one will get to know now.”Berezovsky had become a colourful and controversial figure in London life, firing off regular salvos at his nemesis in the Kremlin, Vladimir Putin. But his decision to take on the financial might of his former protege, Abramovich proved a grievous error.

The case left Berezovsky’s reputation in tatters, as the high court judge ruling in the case described him as an “inherently unreliable witness”, who was “deliberately dishonest” and viewed truth as a “transitory, flexible concept”.

Berezovsky’s legal bill is thought to have generated total fees of over Â£100m.

Details from the second high court battle in January, with Gorbunova, heard how his former partner of 20 years won a freezing order, reported to be $200m, on Berezovsky’s assets after they split up last year amid claims he owed her money and was in dire financial straits.

The asset freeze was thought to include two luxury properties Berezovsky was allegedly trying to sell in France which, she maintained, were promised to her.

Evidence that the businessman was in serious financial difficulties also surfaced with recent reports that the exiled oligarch was attempting to auction off an Andy Warhol limited-edition portrait of Soviet leader Vladimir Lenin in the hope of paying off creditors and legal bills.

A Kremlin insider in the days of Boris Yeltsin, Berezovsky left Russia in the late 1990s after a money-laundering scandal invloving Aeroflot airlines and has been the subject of an extradition order by Russia. He has appeared on Moscow’s most wanted list since 2001 on charges of fraud, money-laundering and attempted interference in the Russian political process. A Russian court sentenced Berezovsky in absentia for embezzling $2bn from two major state companies. Moscow has repeatedly requested his extradition although British authorities have not complied.

In 2007, Berezovsky said he had been told to leave England by British police for his own safety after the British security services claimed they had evidence of an assassination plot against him. (The Guardian)