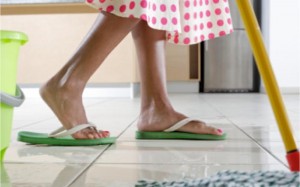 A Sri Lankan girl was found dead in International City in Dubai on Friday evening, Emirates 24/7 reported today. It is reported that she jumped off the balcony of her 4th floor accommodation. Aged 26, Anupama had started working for Jen Perfect cleaning company in Dubai four months ago. The owner of the company, Terin, who is also a Sri Lankan, said he was shocked to find out about her death. â€œI donâ€™t know what happened and why she did it,â€ he said. The apartment in International City housed the girls who worked in his company. Terin insisted that he had no clue that something was bothering Anupama. â€œI havenâ€™t asked the girls anything. They are now being questioned by the CID.â€ This is not the first time that Anupama has worked in Dubai. Earlier she used to work for a garment factory, before going back to Sri Lanka. Terin informed that her body is now moved to Rashid Hospital, and is pending for the final investigation report. â€œI have already informed her family,â€ he said. He confirmed that another employee of his, Ameela, also Sri Lankan, has been arrested in this connection. â€œHe has been working for me for a year now.â€ When asked if he had a role to play in her death, Terin refused to comment. â€œI donâ€™t know. I hear they had a fight.â€ A Silicon Oasis resident, who had hired Anupama to work in her house a few times, was told about the news when she had called the company. â€œI canâ€™t believe she is dead,â€ she recalled. â€œShe was such a fun-loving girl. Always smiling and chirpy. She didnâ€™t look like a Sri Lankan and spoke good Hindi. â€œShe was very good at her work. She had also worked at two of my friendsâ€™ house and they were all very happy with her. â€œShe never told me about anything that was upsetting her.â€ The resident, however, revealed that Ameela had apparently told her friend that he was upset with the boss, and claimed he was harassing Anupama. The case is now being investigated by the Rashidiya police. ]]>